Uzumaki is a 2000 live-action horror movie about spirals--

Whoops, I'm sorry. I was staring at spirals on Google Images and got momentarily confused. No, since what happened the last time, we don't talk about live action in these reviews anymore. This is not a review of the live action movie which yes is a thing, there's tons of live action Junji Ito movies apparently, but a review of Uzumaki the manga. 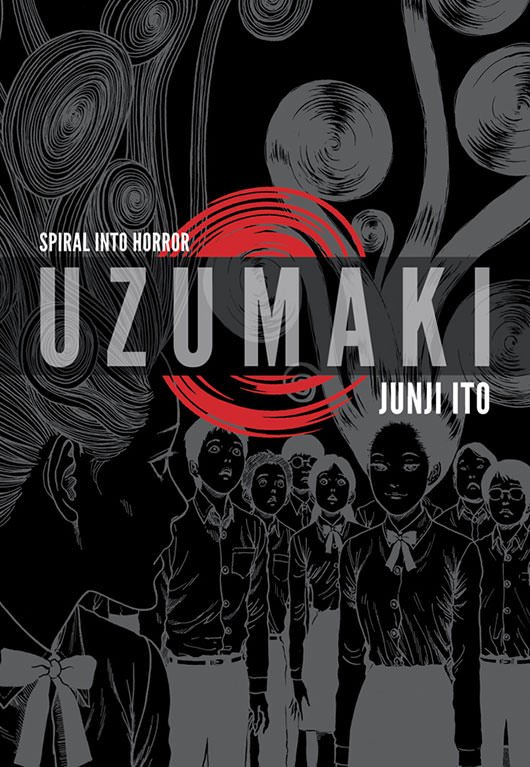 Uzumaki is arguably Junji Ito's best series Opinions are opinions and all, but if someone actually makes the claim that Tomie or Gyo are better, I'll laugh in their faces. Mind you, I like both Tomie and Gyo, but Tomie is just a disguised extended short story collection about this one weird Junji Ito female character and Gyo is... Gyo.

While Uzumaki is more of a focused thing than Tomie, it does still kind of read like a Junji Ito manga collection but entirely about spirals. It all takes place within this one town and we get to know and stick with a handful of characters... but with each chapter, there's a new thing.

"The lighthouse is blasting spiral light rather than normal light! People are turning into snail people, oh fuck! Our hair is becoming alive and turning into spirals, LET'S DO POPULARITY BATTLES!"

There were many moments when I just thought. "This idea could be cut out of Uzumaki entirely and still work on its own in some different Junji Ito collection." But it is actually more cohesive than most of Tomie, and stuff from the previous chapters do actually return or are still evident within the town. Like he just adds more and more insanity to this town with each chapter and it's just completely fucked by the end.

I just fucking love that by the end of the manga it just becomes a free for all of whirlwind battles and people who are stuck in this town of spirals are hunting snail people for food.

The Meaning of the Spiral 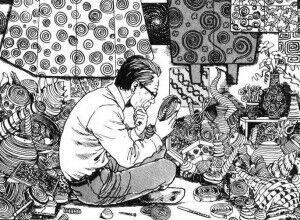 It doesn't matter. It literally doesn't matter. I know you want to think it matters, but it doesn't matter. That's why right now I'm just gonna spoil it. The ending of Uzumaki is not exactly... satisfying. We don't really get answers. Like why were people turning into snail people? Why was almost everything in this town (and this town alone) essentially turning into a spiral by the end? I'm just bringing this up because if you're a person who fucking hates when things leave a bunch of stuff open to intepretation or just straight up doesn't give a fuck about explaining anything, Uzumaki as well as Junji Ito in general, is not for you.

The spiral is some sort of weird omniscient force and is everywhere, and is causing really weird and sometimes genuinely spooky shit to happen. GOT IT.

To be honest, despite being okay with Uzumaki's ending, I also wouldn't have minded seeing a bit more about the spiral creatures/beings (?) that live underneath of the town apparently. But Junji Ito loves getting in and out, one and done. He doesn't care a huge amount about doing a sensible plot that makes sense. That's why right after you get hit by Uzumaki's sort of downer ending, the main characters essentially accept death in this spiral underground and the ruined town finally becomes just one huge spiral, Junji Ito drops an extra chapter on you that happens at some point before the ending about SPIRAL GALAXIES.

I mean this is just my take on it, but you could say the entire manga is a spiral. A descending spiral of weirdness, insanity, and creepiness. With each chapter you proceed into it, the quicker you fall. Which would explain why odds are when someone mentions Junji Ito, chances are, if you know of Junji Ito, your mind will likely go to Uzumaki. Or... or the story about holes I guess. To be fair, I actually saw images of that one before I was even aware of Junji Ito.

Still, like I said, by near the end of the manga, the surviving characters are basically just trying to get the fuck out of the town but they literally can't escape the spiral and end up getting brought back towards the town and then they just end up going straight to the center of it. Everything goes to shit and it shifts from the short stories about spirals to "we need to get the fuck out."

And that brings me to my next point.

Should Have Listened to Shuichi 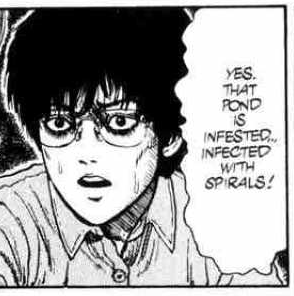 Junji Ito is aware of typical horror tropes. You know:

"Hey, let's go explore the old haunted house!"
"Let's not leave when quite obviously we should leave, because if we just leave then horror things can't happen."
"Woah, here's a random trail of blood! Let's follow it."

But he takes it to a new level with Uzumaki. It is on page 14 of this over 600 page book that Shuichi our main male character turns to his girlfriend Kirie and basically straight up says "Let's get the fuck out of this town right now."

And I had completely forgot he had told Kirie this at the very beginning until I began to reread it. But Kirie doesn't really respond, because she doesn't know how to. Yet, anyone with half a brain would immediately leave after any of the events of any chosen Uzumaki chapter.

Shuichi is actually probably one of my favorite Junji Ito characters. He starts out as a bit weird but with every next chapter of Uzumaki he just becomes worn down bit by bit. He continually repeats his desire to leave the town, but nope, Kirie doesn't immediately leave with him when they could. The third chapter literally ends with a girl having a spiral vortex open up in her head, literally consume a guy, and then eats herself whole. 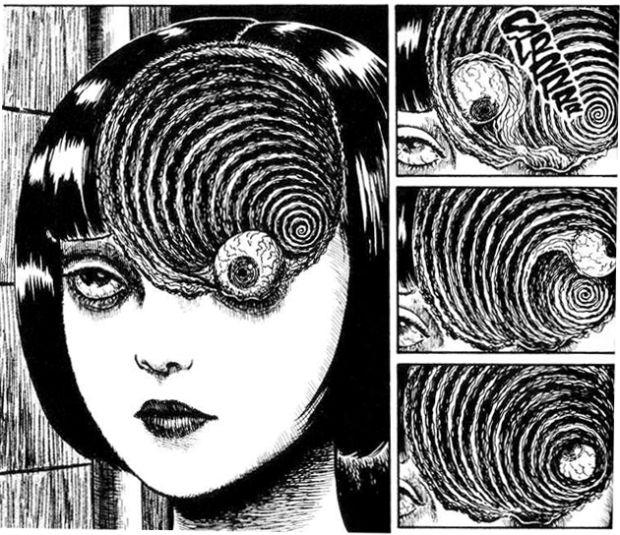 WHY WOULD YOU NOT IMMEDIATELY LEAVE. WHEN PEOPLE ARE CREMATED, THEIR ASHES FLY UP INTO THE SKY, FORM A SPIRAL, AND THEN ARE SUCKED DOWN INTO THE LAKE. THERE IS CLEARLY SOMETHING WEIRD GOING ON WITH THIS TOWN.

But you know, Shuichi's still a good guy. In the chapter when Kirie's hair becomes spirals and takes on a life on its own and is literally sucking her life away, despite Shuichi's already spreading fear and hatred of spirals, he still shows up in the end and saves her by forcefully cutting her hair even as it's trying to fucking kill him. 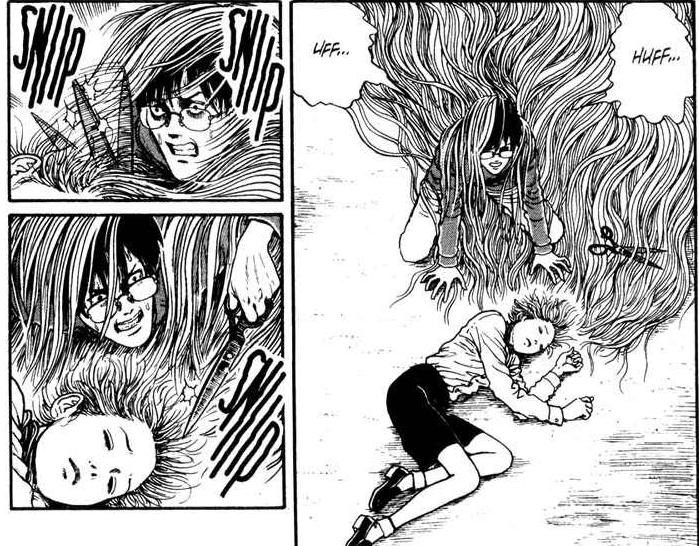 As a matter of fact, he could have just said fuck it at any point and just left the town on his own but nope. Kirie stayed, so he stayed. What a good guy. I'm so glad it ended well for--oh right... it didn't. 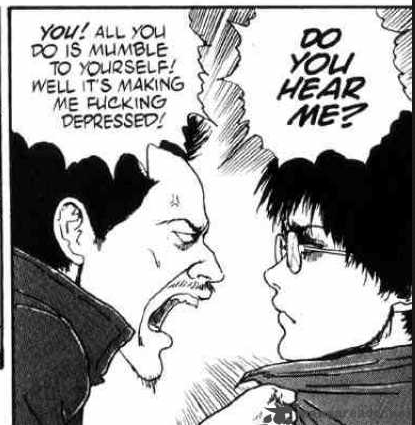 Of the three long series, Uzumaki is definitely the one that remains... it doesn't get stale because it throws something new at you with every chapter until the inevitable

final descent into insanity and spirals. Tomie retains its weirdness but apart from I think the first handful of stories, there's really no continuity among them. Gyo... sort of goes a bit too far and departs from "attack of rotten fish" and enters weird "blob people spewing gas" territory. With Uzumaki, it's still always about the spirals.

There's just so many fun sequences and neat art for horror fans. Like the newborns talking to each other and saying they want to be put back in the womb because it's more comfortable? And then the fucked up doctor who is actually doing it and then feasting on spirals mushrooms that grow from the discarded placentas? And never mind the fact that even before this, these women were basically becoming human mosquitoes and feasting off of people's blood and have now developed needle spiral tongues? Kirie escapes that hospital and literally never goes back and we never find out what the fuck happens now that the entire hospital staff is addicted to placenta spiral fungus or having their blood harvested by pregnant women who have had their babies sowed back into their stomachs. 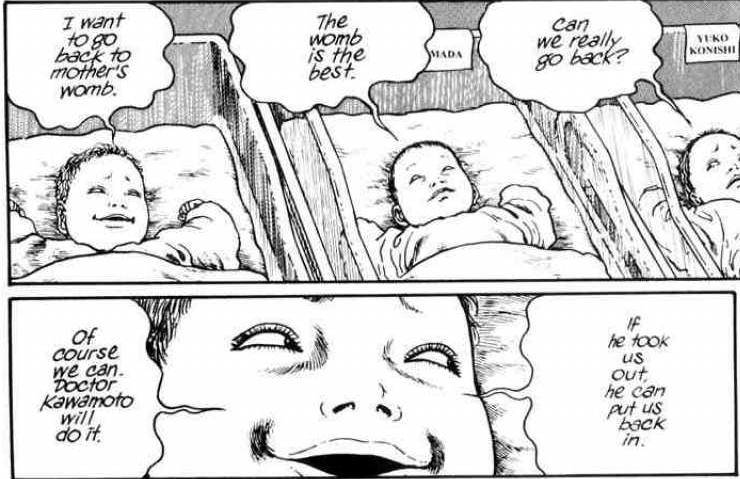 Jesus Christ, after that chapter, THERE IS IMMEDIATELY A CHAPTER WHERE A HURRICANE FALLS IN LOVE WITH KIRIE SO IT STARTS CHASING HER IN AN ATTEMPT TO ABDUCT HER. Shuichi, who has basically been driven insane at this point, straight up says to her completely seriously: "Sounds like it's taken quite a fancy to you. I think I may have a rival." 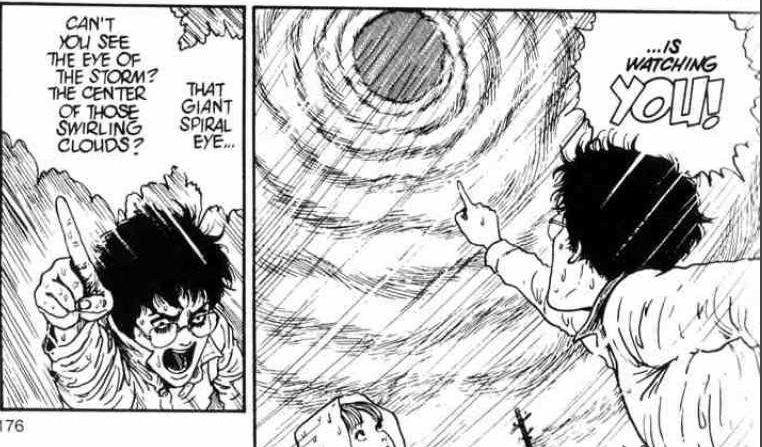 THE HURRICANE IS IN LOVE WITH HER. A HURRICANE. IT SUCKS UP SOME RANDOM GIRL WHO JUST HAPPENS TO BE WEARING THE SAME COAT AS KIRIE, THEN IMMEDIATELY SPITS HER OUT CAUSING HER TO FALL TO HER DEATH.

I'm not even going to talk about Jack in the Box because that would ruin it, but if it isn't my favorite chapter of all of Uzumaki, it's absolutely in the top three. As a matter of fact, I honestly recommend that if you don't intend on reading Uzumaki no matter what, just give that chapter a read. Chapter 7. It's great. 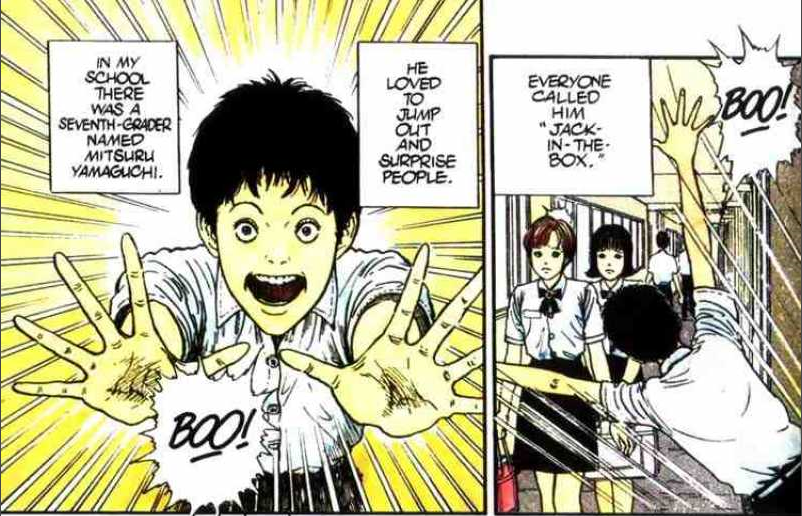 A 9 out of 10. I can't say it enough, but I love Uzumaki. There's more I could have said, there's more parts I could have went into, but I feel it'd be best to just experience the bulk of this manga on your own. I will say this though, if you don't like Uzumaki (from my observations, it seems like a love or hate it sort of thing), you probably will not enjoy any of Junji Ito's other stuff considering this contains (in my opinion) some of his best stuff. Because while each of his short story collections contains something a little bit different, none of them hit the Uzumaki mark for me. Some came close, and some of the ideas I loved, but Uzumaki overall is probably my favorite Junji Ito work.