Classroom Crisis is a show about space exploration...?

No, that's not right.

Classroom Crisis is a romance series...?

Classroom Crisis is a drama about corporate conspiracies and rivalries...?

That's kind of there, but still misses the mark...

Classroom Crisis is a fun slice of life about a classroom of rocket building students...?

Fun? When the hell was it fun?

Classroom Crisis is a show about teamwork...?

Classroom Crisis is a show about a teenager who is a sharklike business man sort entering a class as a student but simultaneously preparing to dismantle the class to trim the budget for the corporation that the classroom is a part of...? Until he doesn't want to do that anymore and it turns out he's a good guy deep down?

...I think that's about as good as we're gonna get. 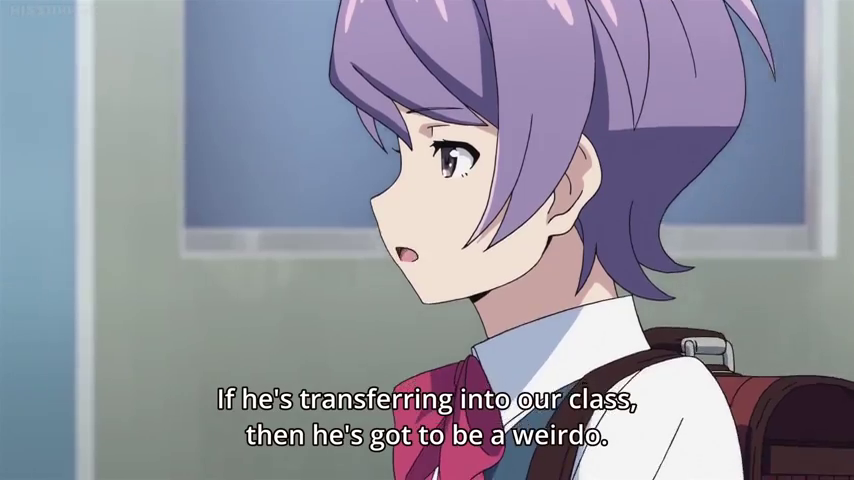 Classroom Crisis is an original anime brought to us by a studio called Lay-duce, and it is a mishmash of a bunch of different things that could have worked on their own, but are instead just slapped on top of each other. And it's very boring. Because just like another certain show also about a classroom, the show tries to be very dramatic and act as if the stuff happening matters, but it doesn't.

"You're out of money! Ha ha! Bet you can't do science things! You'll have to use your imagination and creativity to get out of this on--oh... you found a loophole in the contract. Wow! You solved the problem of the Classroom Crisis!" 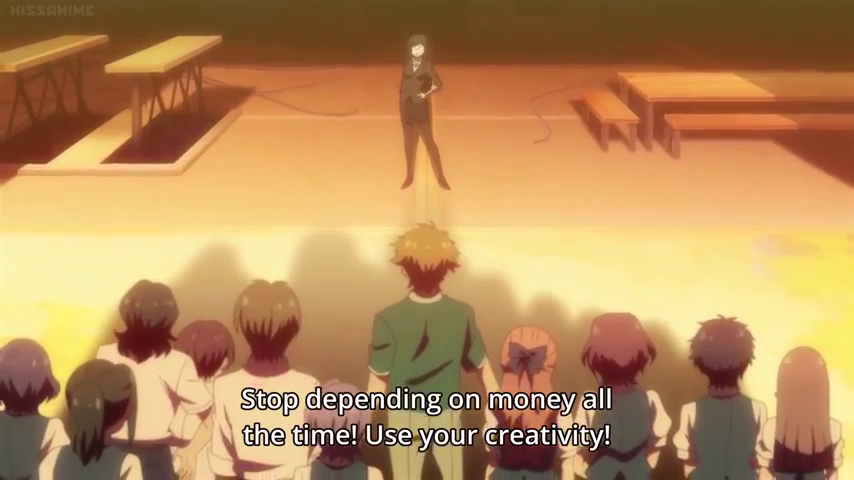 I think the main plot, or what the main point of the show is supposed to be... is getting invested in these students and class. But almost all of them are basically just glorified extras. To the point where I honestly cannot even recall if any of their names were ever spoken throughout the entire show. Every single one of them, their character is just... they're the other students in the class. Main Girl 1, Main Girl 2, and Business Guy Main are literally the only students that ever matter throughout the entire show. But you can't have a series about a classroom of just three students. 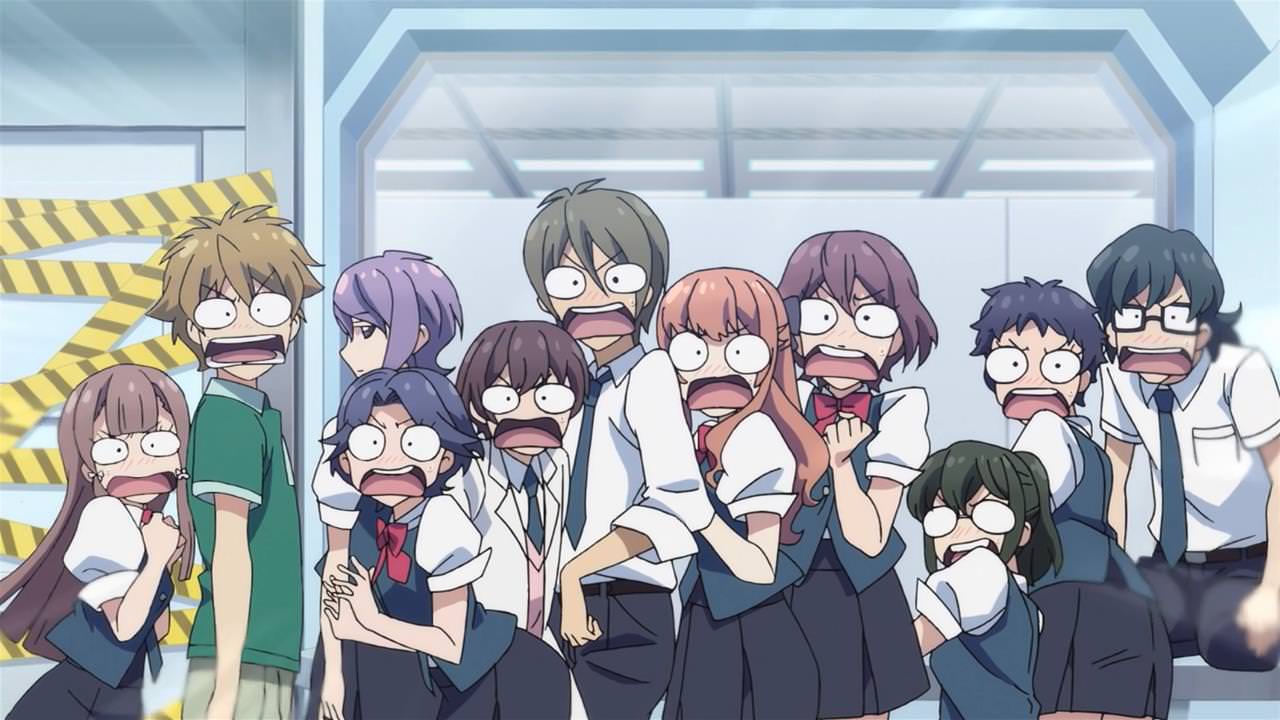 Yet the problem is that on top of having all of these extras taking up screen time, the series actually acts as if they're real characters. Because early on when the Business Guy Main is still actively messing with the class in an attempt to get it shut down, a bunch of the other students become demoralized and quit the class and it's this very dramatic scene. Like that scene is very simple and easy to understand, if you've watched ANYTHING. 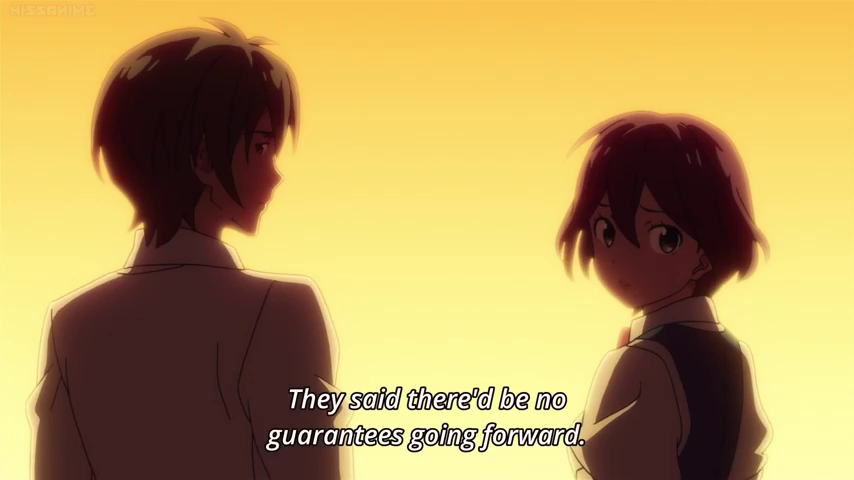 "The students are gonna leave, but in the end, they're gonna come back and the class will work together to save the day!"

But not only are these non-characters, but it's within the first couple of episodes in the show, and it lasts for like an episode at most. Even worse, when the students that quit "come back" one of them basically just straight up says that they were basically only PRETENDING to have quit the class. Which, they may as well have been because despite quitting, they kept coming back to watch the class but always from a distance. 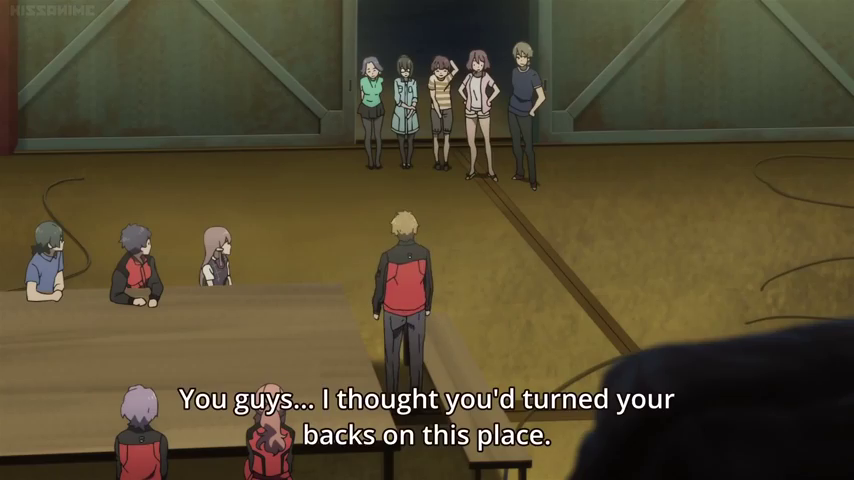 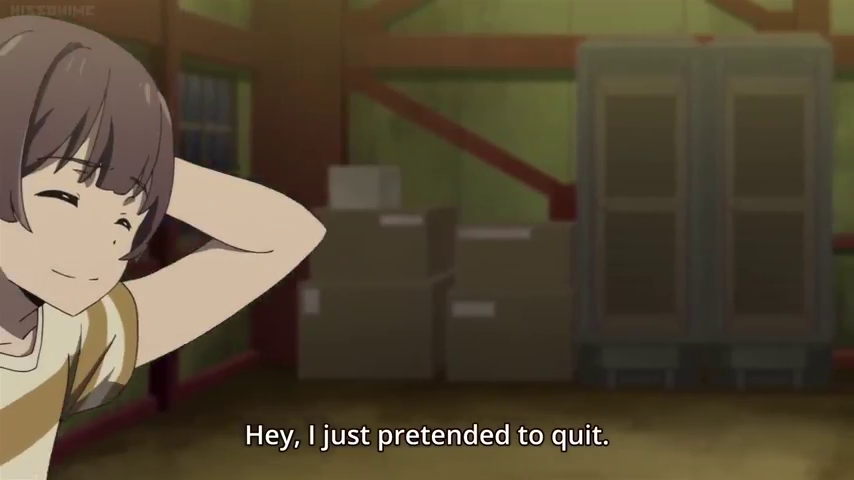 ...Why? What's the point? There's literally no point. Their absence didn't help or hurt the class in any way, and you undercut any sort of drama there by them outright saying that it was just a goof and they were just fucking around.

This show had so many possible paths it could have gone down, and it wasted every single one of them.

By the way, you just gotta love Charlotte's Law. If there is a Main Male Character and a Main Female Character, then god damn it, they have to absolutely love each other by the end of show even if there is absolutely no motivation for either of them. Main Girl 1 herself only decides she loves Business Main Male after Main Girl 2 tells her that Main Girl 1 loves him. It literally came out of nowhere. Sure Main Girl 1 was certainly the nicest of the students towards Business Guy Main, but he was always either this asshole trying to shut down their classroom or just outright dismissive of her entirely.

But no! She loves him! Because the show needs romance. 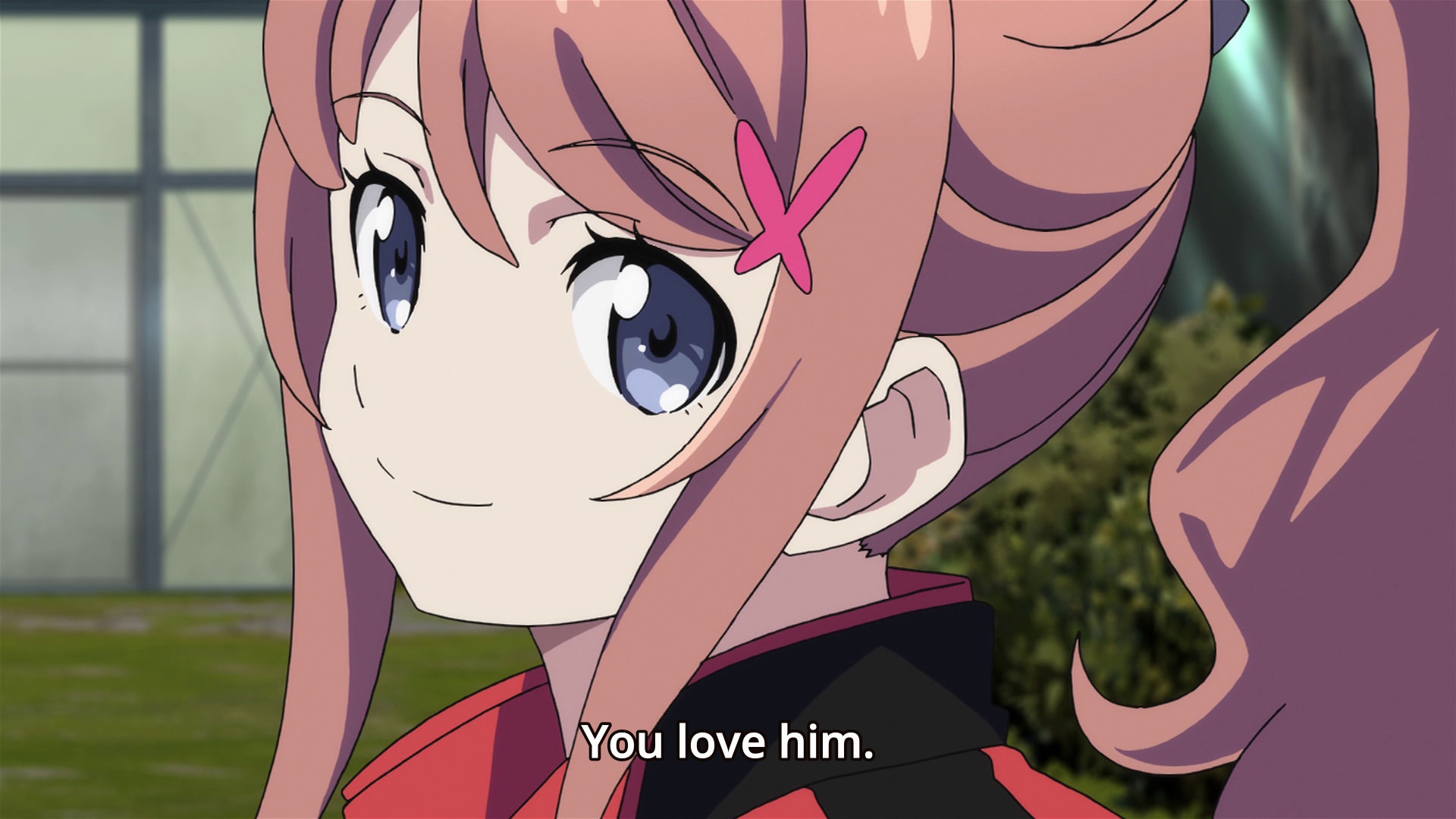 It's additionally frustrating in the case of Classroom Crisis because

there's an actual motivation for romance between Business Guy Main and Main Girl 2. So why not just have that be the actual main romance of the show rather than having Main Girl 1 and then... this weird... love triangle/harem thing?

All those paths... and this was the end result. A mostly boring bad show. Those shows are the ones I consider that have the least worth. The ones where you don't have a strong reaction positively OR negatively. Again, I think the main plot or main purpose of the show is getting invested in this classroom of characters and the four of those that actually matter in the show I've described so vividly in this review. Business Guy Main, Main Girl 1, Main Girl 2, and the Idiot Teacher. I'm invested in these characters!

And unfortunately, it's not really entertaining in a bad way either. Really, I was bored pretty much the entire way through. A show about space exploration and building rockets with political machinations going on behind the scenes in an attempt to thwart the scientists' effort... sounds amazing on paper! Unfortunately, the execution was just complete and utter shit.

I mean, they only go out into space maybe three or four times throughout the entire show. The rest is almost entirely on terraformed Mars and unfortunately, it just looks like a regular Earth city with almost no distinctive features. 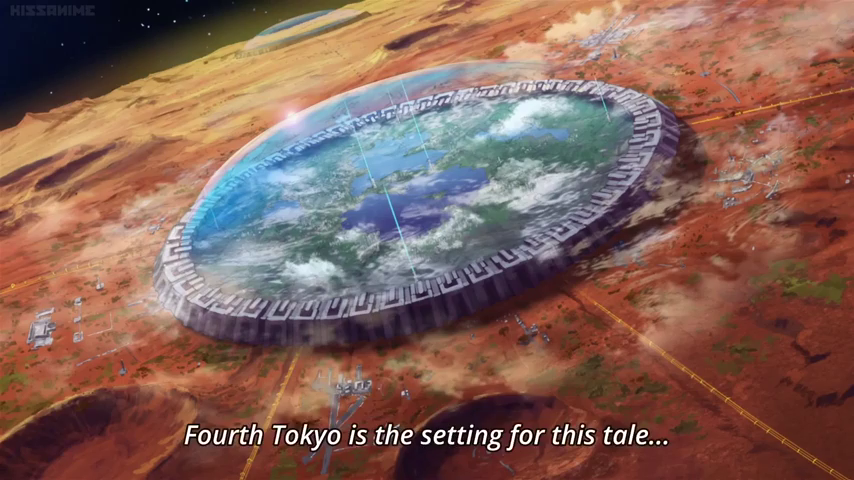 Because of course all of the locations where scenes happen at are always far away from the boundary of the terraform bubble that they're in. Are they on Mars? Because... they could just be on Earth and it wouldn't change the show a single bit. And when the episode following the episode where the class solves their budget problem by using a loophole just outright starts with the student characters at karaoke... I just knew I was in for a terrible time. 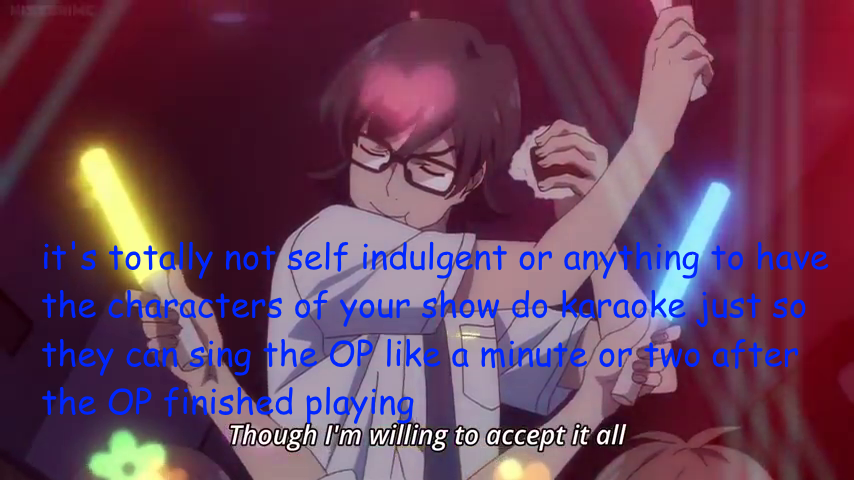 So yeah, an overall nope on this one. A 5 out of 100 as I view it as a complete and utter waste of time. They aimed for mediocrity, and yet they still missed. If you want a good show about space, I'm sure there's plenty out there. And if you want an entertainingly bad show... this isn't that either. 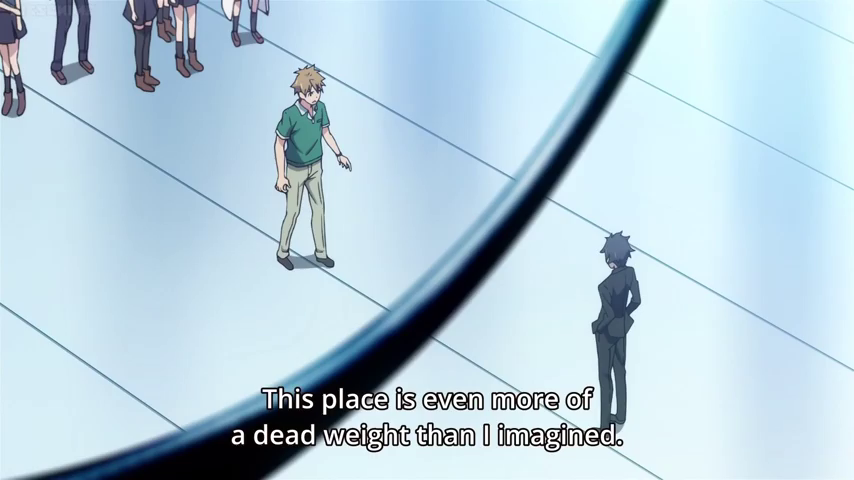 Also, I didn't even mention that the twist of the entire show is

one of the characters' real name is in fact the same as another character's. I didn't feel like the plot was even worth going into, but boy that's some real bad writing. This super cool business guy character? Well, in actuality, he's nobody important! It's actually the girl! We just used him as her double solely because he had the same first name! THEY DON'T EVEN LOOK ALIKE. WHY WOULD YOU HAVE HIM ACT AS HER DOUBLE.