(Ainz Ooal Gown is referred to as Momonga, his nickname.)

Anime has been around for a century, but is more popular now than ever before. Some anime have made a much larger impact than others and have really set standards for the anime to come after. Pokemon, Dragon Ball, and One Punch Man are a few examples of memorable as well as extremely popular anime. Overlord should stand to be yet another on that long list of memorable anime for many reasons, but mainly because of its overall greatness. Overlord II is the best season in the tripartite series and may be the best season of any anime in the Winter season of 2018.

Chapter 1: General Information
So what is Overlord II? Overlord II is the second season in the series “Overlord”. It was first aired on January 9, 2018 and last aired on April 3, 2018. Behind the season/anime are six producers (AT-X, Enterbrain, Grooove, Hakuhodo DY Music & Pictures, NTT Plala, and Kadokawa), one studio (Madhouse), as well as one licensor (Funimation). Kadokawa is a very large company and is behind many popular anime. To name a few, A Place Further than the Universe, Girls’ Last Tour, Kemono Friends (formally), and most importantly, Overlord seasons I-III.

Chapter 2: Story
The story is very good. It continues off of Overlord I where Momonga rules The Great Tomb of Nazarick. He tries to find a powerful item that explains the cause for one of the problems in Overlord I. The plot can be easy to follow and overall is very well done. A negative aspect of this season in my opinion is that it is filled with side plots. They introduce a few new groups in the anime that have an issue they need to resolve. It all pieces together as Nazarick interacts with them later on.

Chapter 3: Humor
This anime is meant to be a more serious type, as seen by the action, adventure, fantasy and supernatural aspects in it. That isn’t always the case however, as it tries to sprinkle some “humor” in certain areas. In my personal opinion, the seriousness and humor the anime portrays don’t blend well. Some of the jokes are funny though.

Albedo is an Overseer of the Floor Guardians in Nazarick and she loves Momonga a lot, as seen by her attitude throughout the anime. This is the main punchline/humor that they beat into the anime in almost all of the 28 episodes (including the two episodes released in Overlord III as of 7/17), making it very dead. In addition, there are two other characters that love Momonga, one of them show jealousy towards Albedo loving him, this being Shalltear. This is also another punchline that they use throughout. Thankfully (or unfortunately depending on what you think of her), Shalltear didn’t have much screen time so this wasn’t an issue. Can’t say the same for Overlord I and (maybe) III. Romance is often used in anime regardless of the genre. Overlord II reels in five new romances, plus two from Overlord I. Romance in this anime is also used a lot for comedic effect and a punchline.
If you were to ask me what episode of Overlord II was the weirdest one, I would definitely say episode five. I won’t spoil any of it for time’s and enjoyments sake, but I will tell you to be prepared. Once you get past the worst of the episode, it actually is a pretty good one. This is a joke that is reused in the following season and it doesn’t quite land the second time in my opinion. So a small piece of criticism of mine would be that the same kind of jokes are repeated too often and unfortunately get stale relatively quickly.

Chapter 4: Characters
Let’s talk about the characters. The main character Momonga, also known as Ainz Ooal Gown in the virtual world, is leader of The Great Tomb of Nazarick. Momonga’s seriousness compared to Overlord I has changed a lot, for the better or worse. Throughout this season, he had less thoughts about being incompetent in certain situations. This ultimately means that he’s in more control of his role and is getting better at being the ruler of Nazarick that his team expects him to be. Another main character I would like to discuss is Albedo. She is an Overseer of the Floor Guardians in Nazarick. She also loves Momonga, which is clearly shown as much as a sharpie bleeds through thin paper. Her being madly in love in him isn’t a reason why she is a good character, but when she is more serious is when her good parts shine. Aside from her love for Momonga, Albedo has some pretty extreme characteristics about her that make her an interesting character; She is territorial as well as completely disgusted by humans. When she has to get something done she is all business and no games.
Shalltear is a vampire and a Floor Guardian. She was a very important character in Overlord I, but was only shown in a few episodes in II. There is a reason, however, but it is a pretty weak one, as seen in episode one of Overlord II. (This is something I will elaborate later on) She is a decent character, but she really wasn’t an important one. Any of the other characters could have been the important character (as in, what Shalltear did any of the other characters could have done) and they would also be in the second and third season (unlike her), so there wouldn't be anything missing without her. Demiurge is a demon and Floor Guardian. He is considered one of the cruelest members in Nazarick. He is a pretty interesting character because it always seems like he’s hiding something, but always ends up helping Momonga with his goals. The final important character is Sebas, the Head Butler. He was part of a side plot in Overlord II which tied into the main one well. Unlike the rest of the team Sebas shows more compassion toward humans and thus plays an important role in his side story.

Chapter 5: Audio
Audio is an important part to making a good anime. A high quality anime usually has good audio. Overlord does have good audio, except for one rare occasion in Overlord II. In the sixth episode at around the twenty one minute mark you might notice one of the antagonistic characters have his voice actor move away from his mic. The voice actors are pretty good with portraying the characters, so a pat on the back for that. The opening theme and ending theme for Overlord II is perfect; it’s catchy and has good animation. “Go Cry Go” by OxT is a really good opening, and might be one the best out of the three seasons. "Hydra" by Myth & Roid is also pretty good, but Overlord III’s ending is the best.

Chapter 6: Visuals
Around thirty companies helped animate Overlord II, and it really shows. The characters are textured well, especially Momonga because of his bones. Something I didn’t notice while watching the anime is the 3D CG. It looks decent but upon closer inspection it isn’t really all that great An example of this is in both Overlord I and II where the skeletons are fully CG and don’t look very good as a result. The ones behind the 3D CG in Overlord II is Madbox. They have worked on CG in about twenty five different anime, including some Attack on Titan content. Most of the reviews for their implementation of the CG in other animes have been criticized heavily so I’m surprised to see it be the choice for this anime. For whatever the reason may be, Overlord I had a different company consisting of twelve 3D CG animators and one 3D CG producer work on its CG but then dropped them for Overlord II. As for Overlord III, it is still unknown what path they will take regarding the CG. 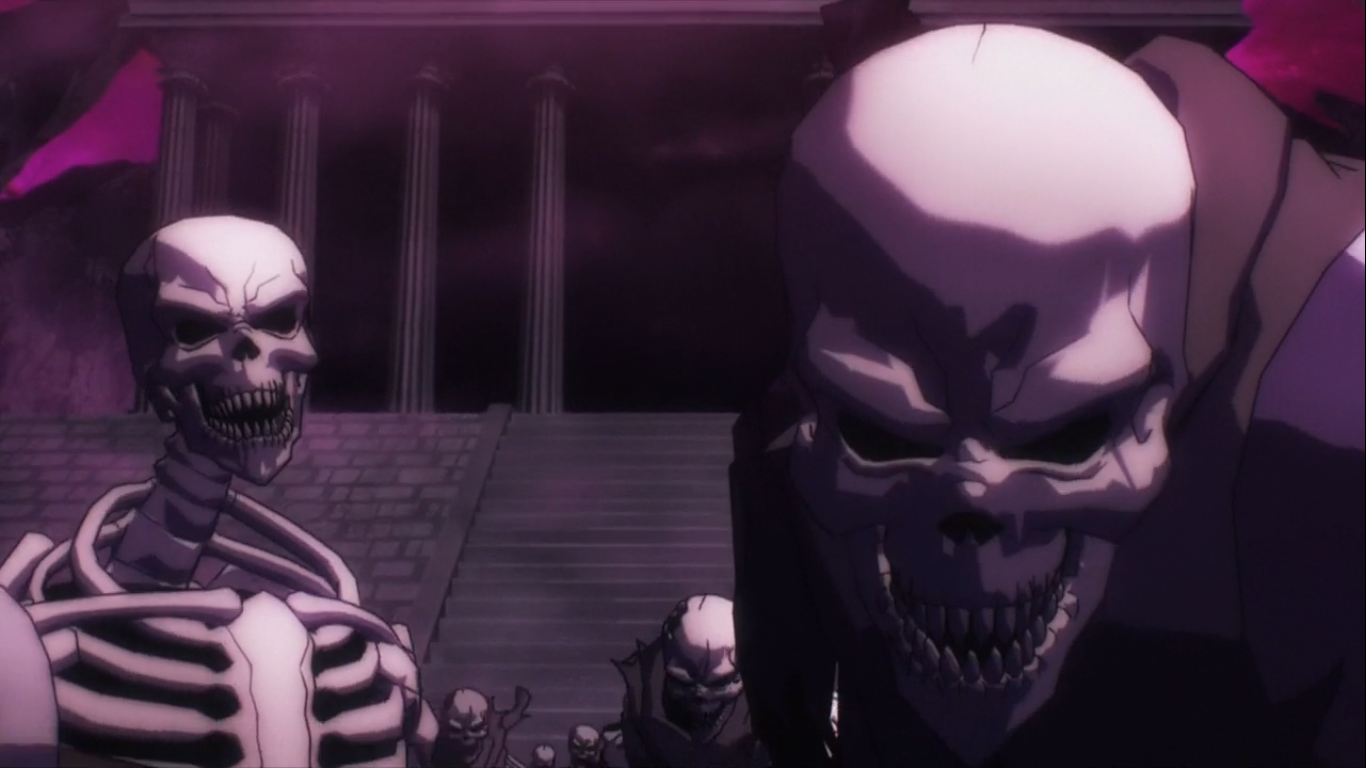 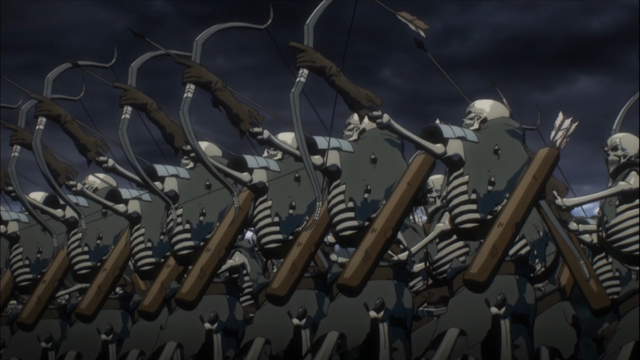 The first six minutes and a half are side plots that are either going to be resolved, brought up again in Overlord II, or is not brought up again until possibly Overlord III or later. I personally don’t think it’s a good idea to begin the season with side plots, but it did focus on the main plot as well. The first episode includes a character from the first season that is less important this time around. I’m referring to Hamusuke, and whether you like him or not he is the giant adorable hamster. He was a pretty fun addition to the anime in Overlord I so it sucks that he wasn’t in II for a lot of time. As always, Albedo starts the season off with her displaying her love for Momonga by needlessly praising him. Jealousy is another thing that Albedo shows in this episode towards Shalltear when Momonga showed concern for Shalltear. In this season, Momonga plans to find the item used to mind control Shalltear in Overlord I by checking out the places in E-Rantel. Speaking of Shalltear, she’s in such a bad state that she decides to drink knowing that it could have had a negative effect on her. Also in this episode, Cocytus mentions his gratitude to being in charge of Nazarick’s first war, which is explained throughout the next few episodes. The ending has a new side plot that leaves us off in a cliffhanger.
Most of what I said, if not everything, about the first episode, was pretty critical. However, that doesn’t mean I entirely hate the episode, I just don’t like those specific parts about it. The voice actors and the opening and ending are to name a few of the things I liked about it. My first impression rating of season 2 is a 6/10.

Chapter 8: Final Thoughts (feat. TLDR)
To make a long review short, this is a very good season of Overlord, one of the best. The story was good, the jokes were decent, the characters were amazing (including the new additions), the audio was also amazing, and the animation was good. Out of 7 trials, I give thou a rating of 7.57/10 or 75%. More specifically:

Thanks for reading my review on Overlord!