There's a whole ton of fucked up and strange shit in this manga. So, if you are averse to horrifically dark, strange, or disgusting series, you are absolutely in the wrong place. 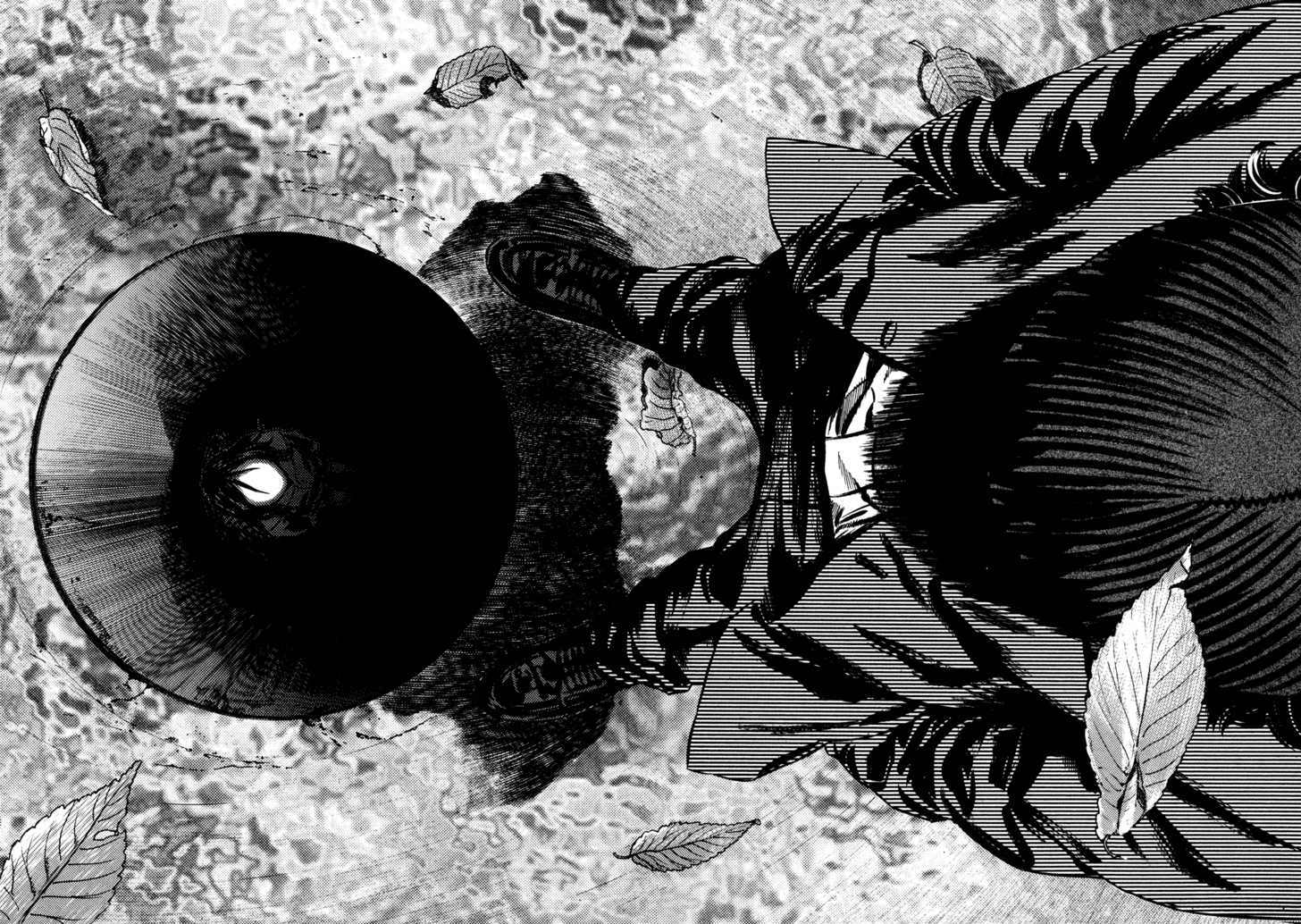 Okay, Homunculus is a psychological horror manga by Hideo Yamamoto. And right out of the gate, I have to say this might be one of the most fucked up, twisted, dark, and disgusting series I've ever read. Through the fifteen volumes, there were just entire stretches where I was just completely horrified but I just kept on reading. 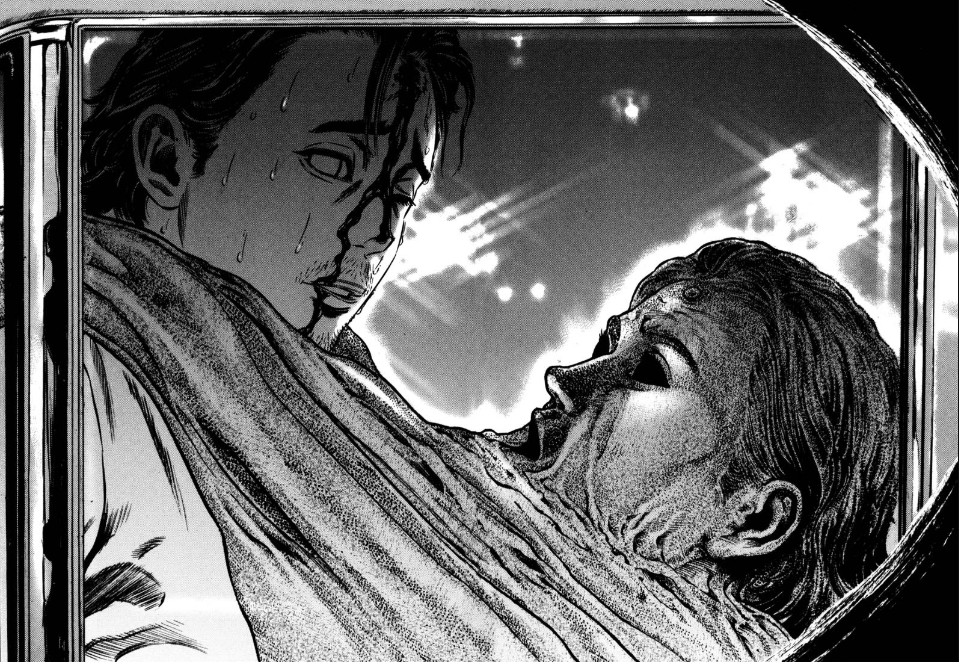 But that's exactly what I would want from a series entirely centered around the idea of trepanation. Just make a hole in your skull, and maybe you'll get some sort of sixth sense. Obviously, you should not attempt this, you should NOT drill a hole into your own skull or have someone else do it...

Can I just say right now I love that there is a series that exists in this world that has to have a warning "PLEASE DO NOT DRILL A HOLE INTO YOUR SKULL." 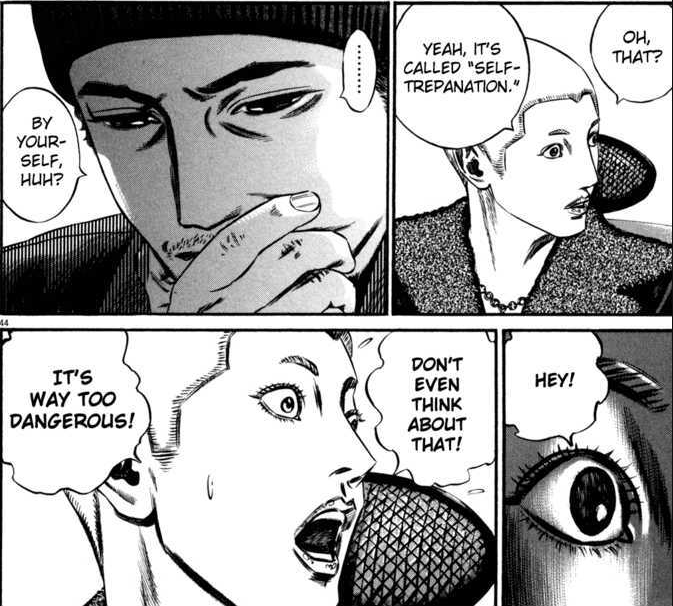 However, in the world of this series, this act of trepanation causes the protagonist to begin seeing things called Homunucli... 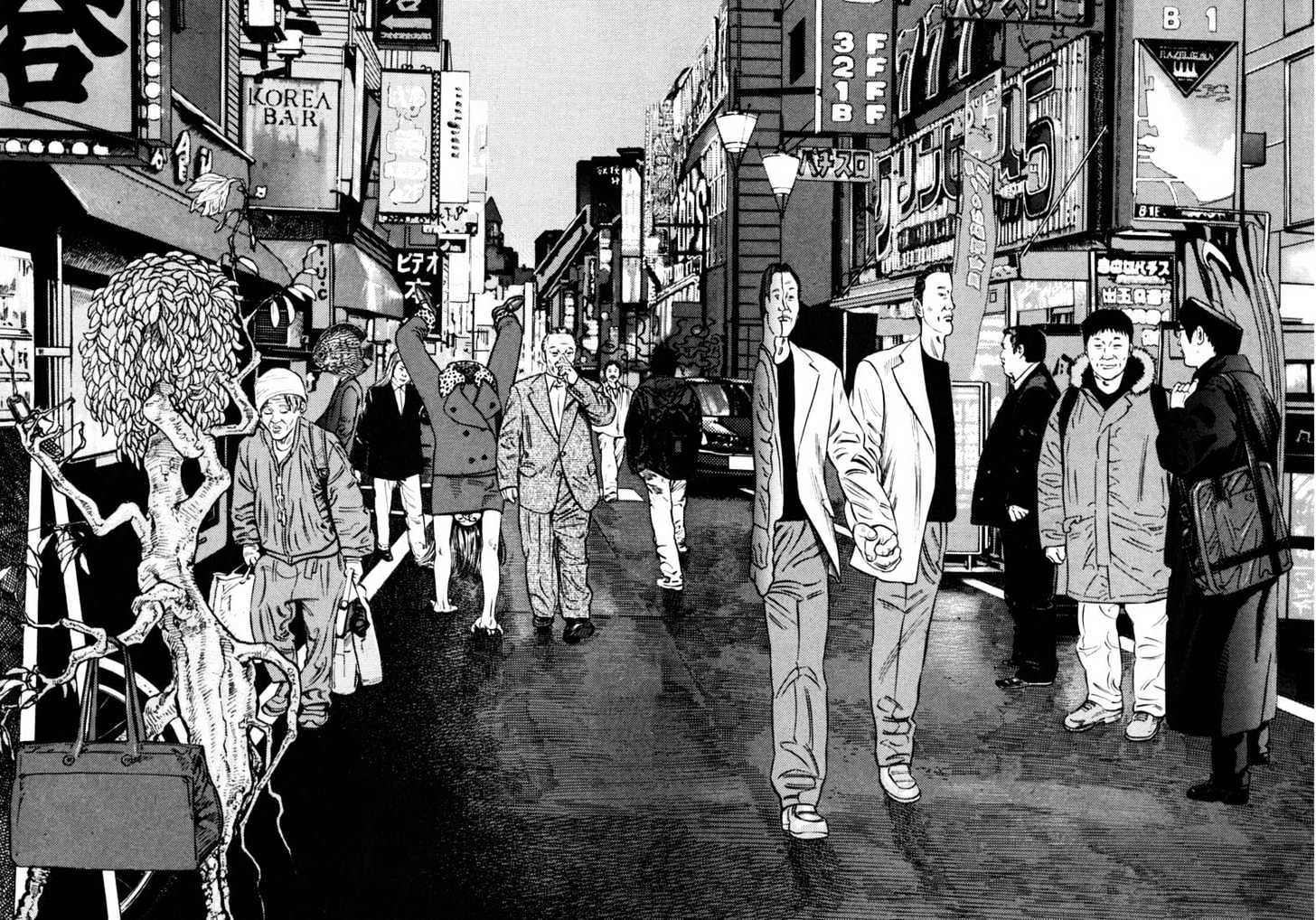 This manga hooked me in pretty quickly. Like even before it really started getting weird, I was already really interested in the main character. From chapter one, it is very clear that our protagonist has NUMEROUS problems. Even when he was just "Car Guy", the weird guy who hung around with the homeless but always chose to sleep in his car which he parked in front of a classy rich hotel, Nakoshi was just absolutely fascinating to me. 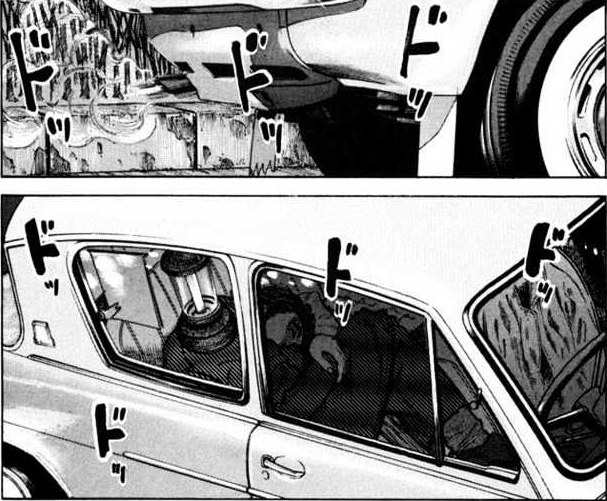 Why is this guy obsessed with his car? Why does he sleep in a fetal position while sucking his thumb? What happened to him that led him here?

So when the weird but lovable and almost seemingly manipulative Ito knocks on Nakoshi's window and leads him down the rabbit hole of trepanation, I think that's when the series makes the full leap from pretty interesting to just downright fucking fascinating. 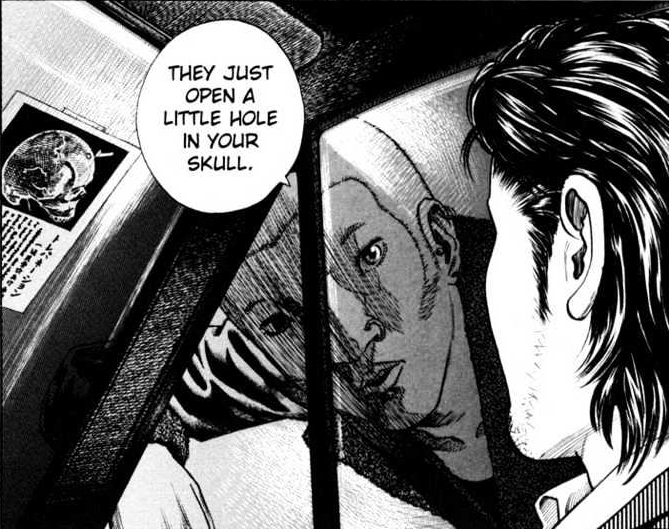 And mind you, it's not just all of the weird shit Nakoshi starts seeing attached to people on the street. Though, I do love all of the scenes where it's just him looking at a bunch of weird Homunculi. But no, it's when he actually starts interacting with them and trying to get to the core of their problems or disorders that it gets interesting. Because it's as he does this that he's forced to look inward to his own many problems. 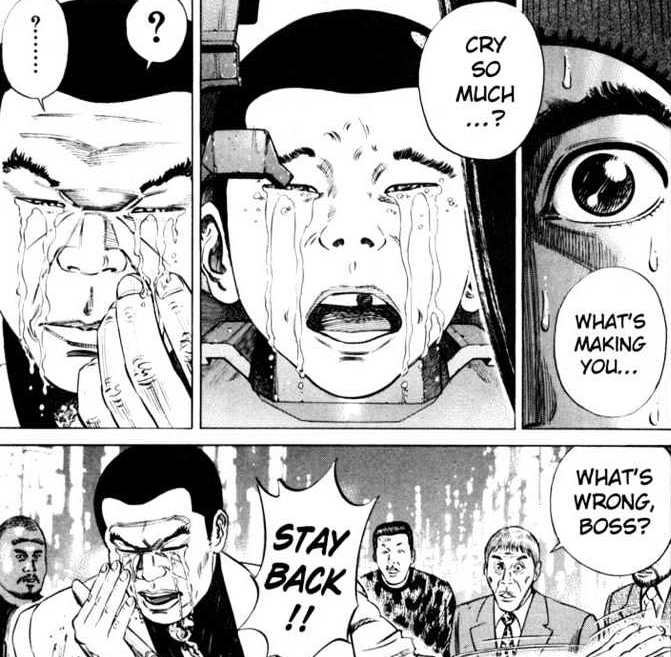 He usually ends up doing very strange or just outright horrible things in the process of solving these Homunculi. And this includes straight up

rape of a high school student but then it becomes consensual when he proceeds to... drink the blood from where she had been repeatedly stabbing her own leg so SHE could drink her... own blood. No, for real. This happened. Their connection/similarity was that she enjoys drinking her own blood, while he enjoys eating his own... ejaculate. For the record, it was this whole range of volumes where I was horrified yet couldn't stop myself from reading on.

But then you also have the conflict of… are the Homunculi actually real? Are they just merely delusions of a highly deluded and desperate mind? 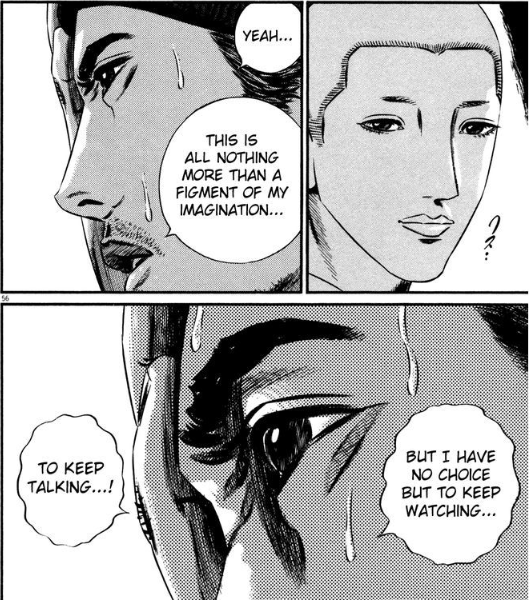 Even if you are of the opinion that yes, indeed, Nakoshi is just completely fooling himself into believing that if he blocks out his right eye’s vision, he can see all these strange things, that still doesn’t change that he’s going around and finding people with similar flaws and actually causing them to hopefully open up and possibly solve their problems.

Really some of the parts where I was the most engaged were probably these arguments and discussions, or when one of the people who possessed a Homunculus actually challenged or brought up Nakoshi’s own various flaws. 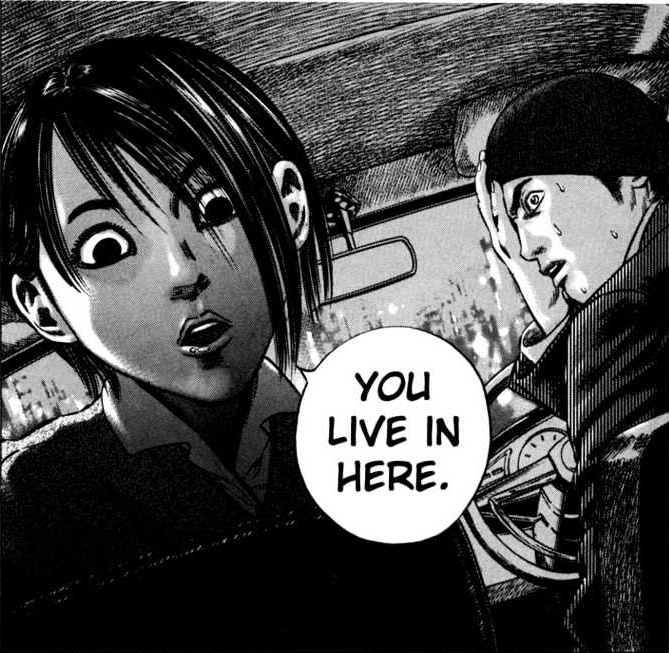 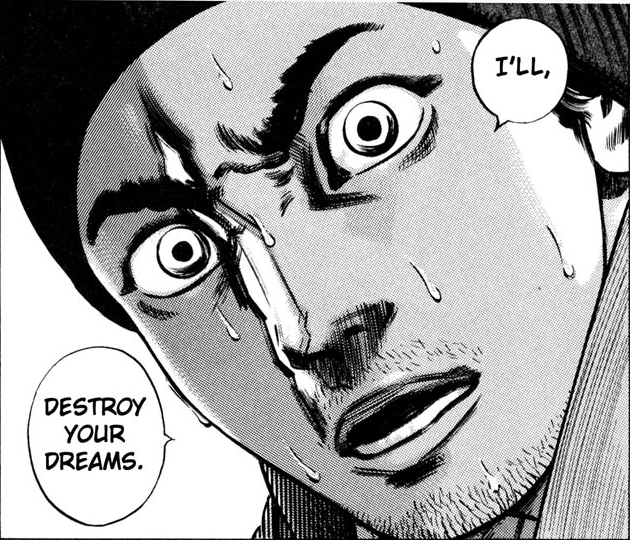 I don’t want to go too far in-depth on him, but Nakoshi is definitely a piece of the core of why I loved this series so much. I am very much a firm believer that interesting characters have to have flaws. Nakoshi is so irrevocably fucked up, that I genuinely was rooting or wanting him to actually make progress in accepting his own problems so he could work on them. Because to at least an extent he is well aware that he is not happy in his current situation. He wasn’t happy before, but even after he did what he did, he still failed to find true happiness.

He is a vain, selfish, and horribly hypocritical person. 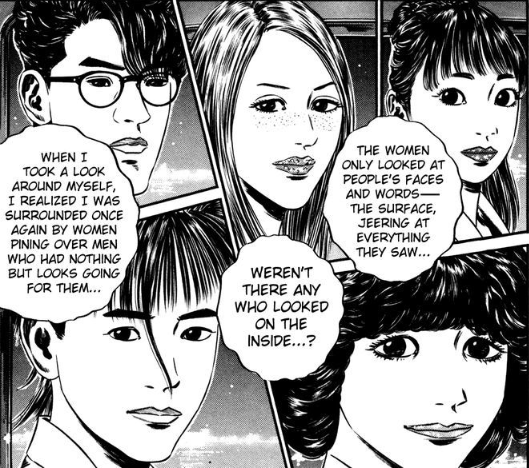 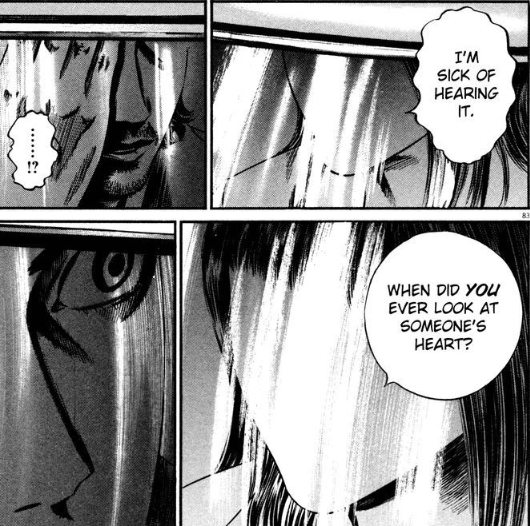 But yet he is a horribly real and sad character. He wasn't happy with who he was so he lived with his eyes always pointed down towards the ground and away from the people and the world around him. 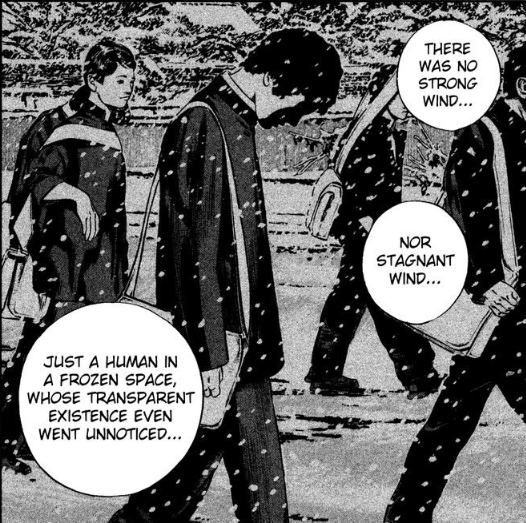 Yet when he discards his original self and tries to become a new person, he finds that his new life of lies is also similarly an unhappy one. Nakoshi is literally stuck between worlds. 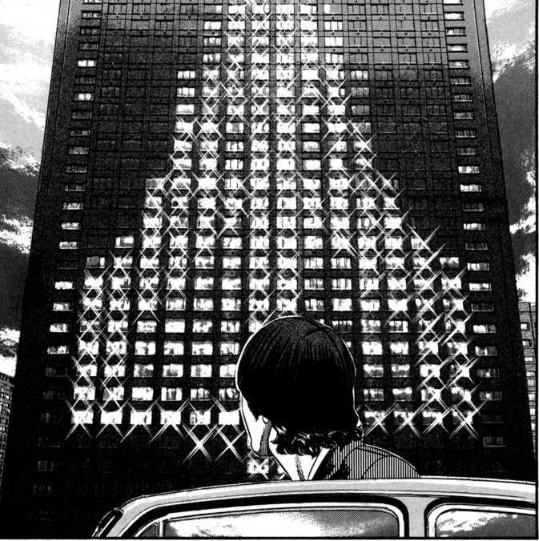 Between the ritzy hotel and the park where homeless men camp, Nakoshi lives inside his dearly treasured car sleeping in a fetal position while sucking his thumb.

Then when he's thrust into this world of Homunculi despite all of his flaws, Nakoshi genuinely tries to help other people who carry them. Granted to an extent it's for the purpose of helping himself, but Nakoshi still manages to make impacts on more than a couple of various people's lives, sometimes outright forcing them to acknowledge their problems. But it's more than that.

Ito repeatedly tells him time and time again throughout the series that the Homunculi, ALL OF THEM, are simply representations of Nakoshi's own problems. And indeed with each one he solves, he takes a piece of it unto himself. 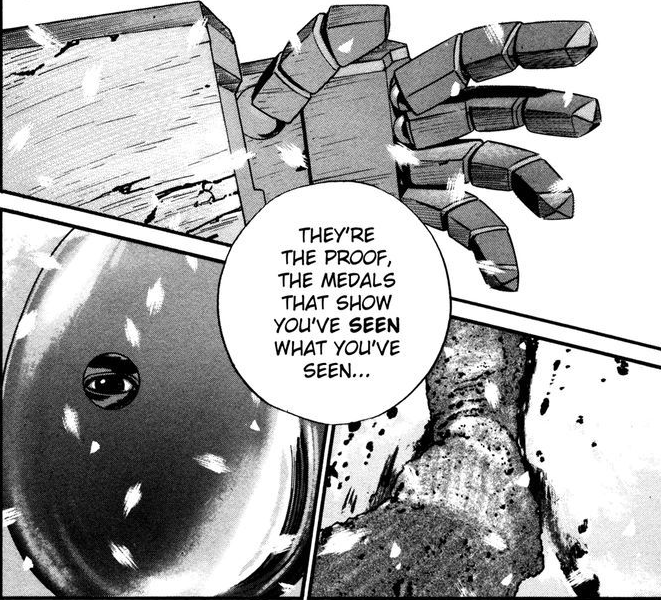 But yet it seems with each one he solves, it seems as if he’s getting no closer to solving his problems and removing these Homunculi that have now attached themselves to Nakoshi himself. So he believes he is forced to delve even further down this path given to him by Ito via trepanation... 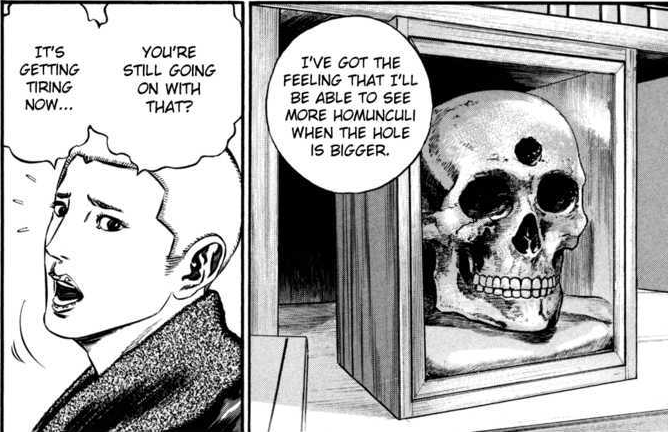 ...I love Nakoshi's character so much not only because of all his flaws and how fucked up his life is, but he so readily descends into this world of trepanation and Homunculi that he comes across completely fucking insane. Sure, he does end up helping several other people who like him are carrying their own flaws, but the depths he is willing to sink into to do so is just completely crazy. Honestly, more than a bit of the horror vibes of this manga come from Nakoshi himself. 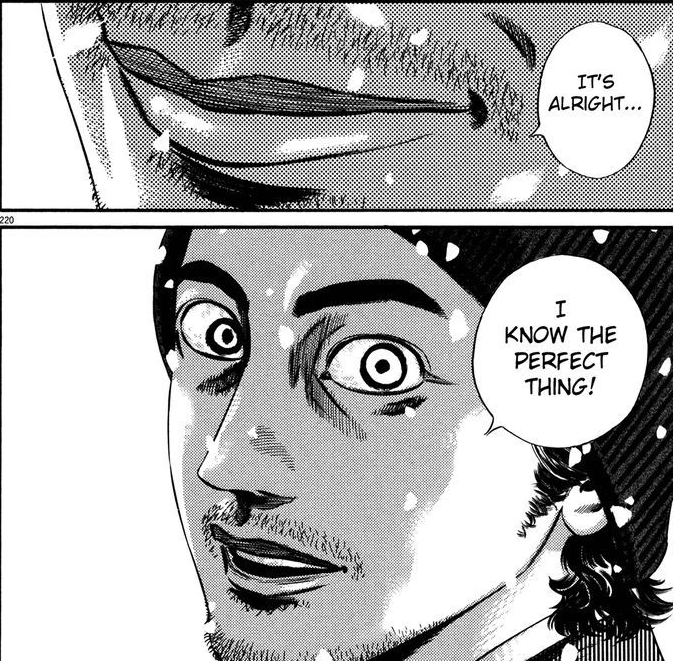 Like starting out in the manga Nakoshi already has all of his flaws that are shown to us as we gradually learn more and more about his life and his choice, but there's just... this horrible sense of unease that just oozes from him through the entire fucking manga. It only gets worse and worse and actually crossed lines I would have never expected it to. Like it says something that when at a point another character sees Nakoshi as a goddamned demon, I kind of actually agreed with that assessment. And not even solely because of what we learn about Nakoshi's relationship to that specific character, mind you. 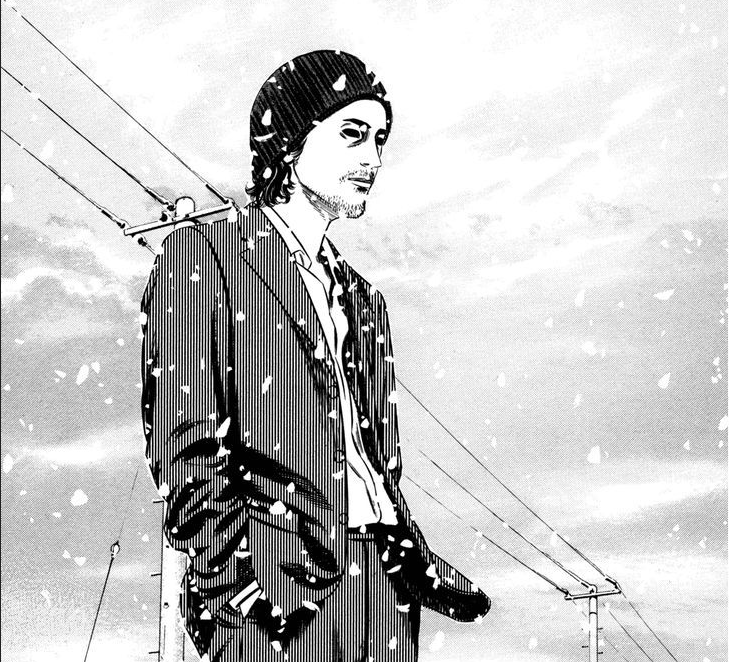 You just want him to realize what he's doing or rather what he's attempting to do isn't just going to lead him to some magical solution to his problems. Like the manga basically presents to us on numerous occasions what Nakoshi looks like when he's going around looking at other people's Homunculi. He looks like a complete and utter fucking madman. 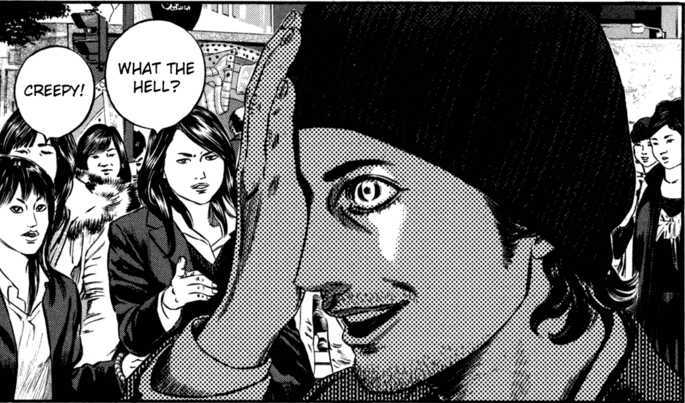 Yet, he's actually getting people to accept their problems, the horrible things they've done in the past they're trying to avoid... he's forging genuine connections to these similarly flawed people.

So... there has to be some validity in what he sees... right? 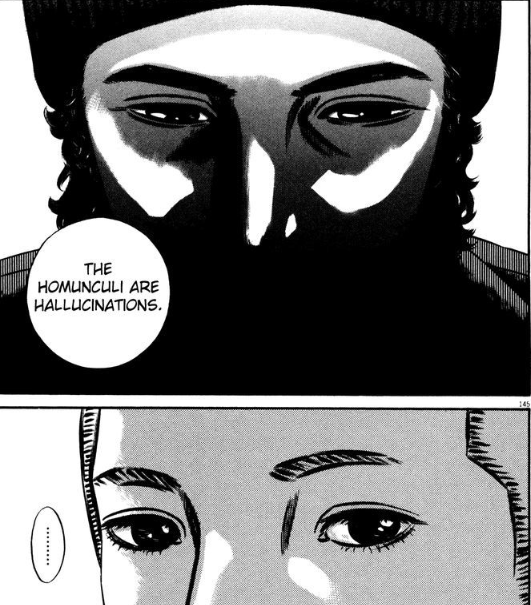 The Horror of Homunculus

Psychological horror is probably one of my favorite flavors of horror. And it's impossible to describe Homunculus as anything else. No outright spoilers, but it's definitely a manga that I think a reread is eventually necessary. So much stuff that is later developed is set up almost from the very beginning of the manga. 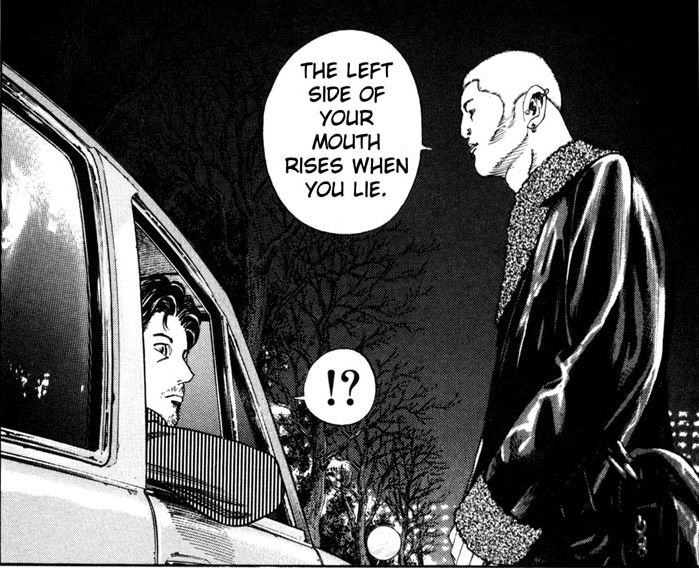 Like as strange and bizarre as it gets, Homunculus never ceases being Nakoshi's story. It is the story of the aftermath of the various life decisions he has made transforming him into a business man on an "extended leave" living in his car. The sole reason he is introduced to this strange world of homunculi and trepanation because a similarly deeply flawed person wished to use him in an experiment and had his car towed away so Nakoshi would need the money Ito was offering him.

But it didn't stop when Ito gave Nakoshi the rest of his money. He was still seeing homunculi, he was still unhappy and flawed. He needed to go further now that Ito had pushed him into this world. And Ito's curiosity led him to initially encourage Nakoshi's newly found motivation. 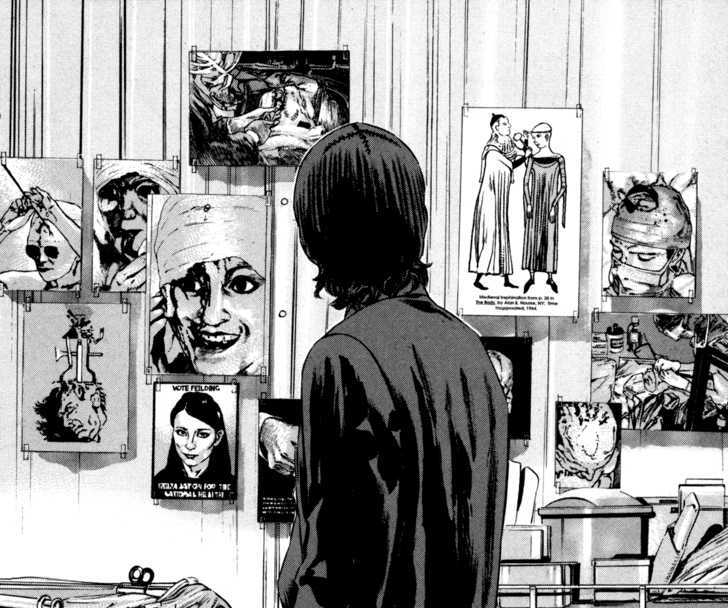 For better or for worse. And the true horror of this manga, is this transformation that Nakoshi further and further slips into. A completely flawed to his core man desperate for things to be different. Desperate to be happy, desperate for his life to not be empty and meaningless... wanting to be himself, yet hating the person he voluntarily tries to become.

The horror of course comes from the fact that the supposed solution he has found... is drilling a hole into his skull. 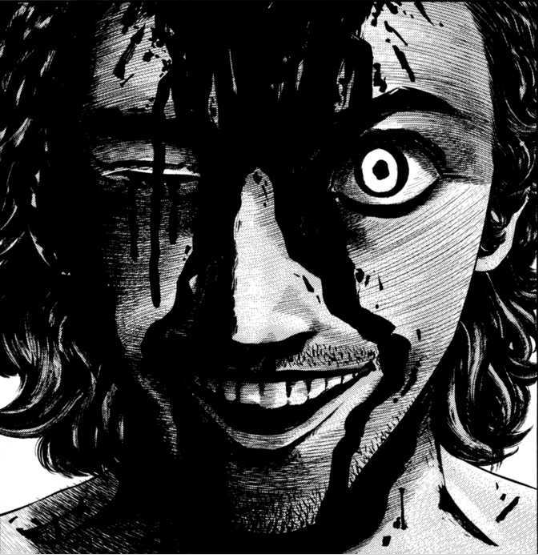 It's just absolutely fantastic. Like early on I was already really enjoying it on a surface level. The strange stuff, the disgusting stuff, the Homunculi...

But when it manages to descend to a level I never imagined it was going to reach, I was just enthralled. In summation, and at this point I've had some time to think on it, Homunculus is without a doubt one of the darkest and strangest manga I've ever read. And to be quite honest, while still replaying several of the very later volumes in my head, I'm not too sure it'll ever be topped. 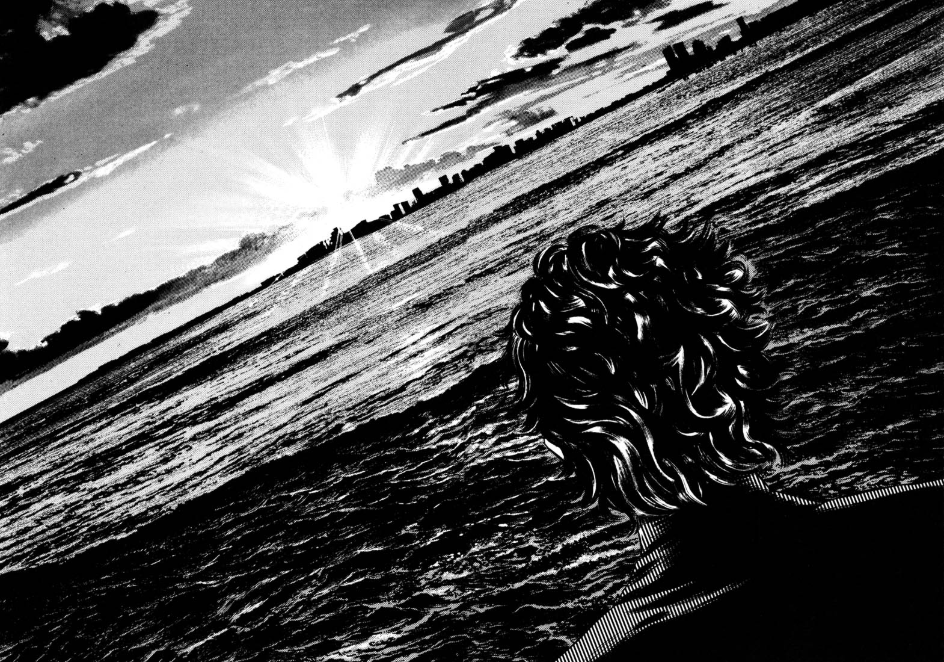