It’s never good to start this sort of thing off with a negative, so I will say, before I begin in earnest, that Blood-C is far from the worst anime I’ve ever seen (that title probably still goes to the sole episode I’ve watched of Modern Magic Made Simple), nor the worst I’ve ever completed (Occult Academy’s final act is far more insulting and the film Expelled From Paradise is much more boring). With that out of the way, I should note though, that Blood-C takes an earnest swing at being among the most pointless.

The core concept of Blood-C isn’t hard to grasp. Our protagonist is Saya, a high schooler who is also a miko who, at night, defends her town from vicious demons called Elder Bairns with the help of a sacred katana and her own ability to heal quickly. 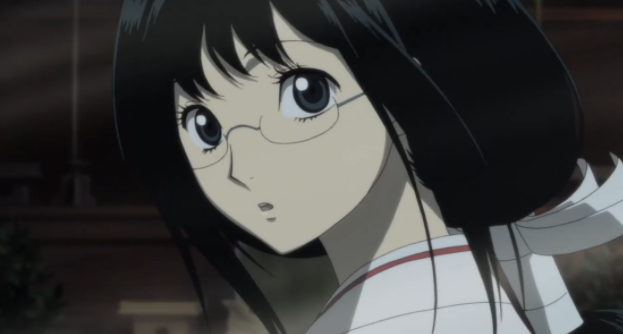 This simple premise is an iteration of among the oldest stories in fiction--protagonist with special abilities slays wicked monsters--and it’s really, genuinely quite hard to screw this up. A better series, even if it were not exactly transcendent, would milk this setup for all the pulpy action that it’s worth. Indeed, the first few episodes are promising on that front. After sitting through about 15 minutes of the world’s dullest high school life anime, the first few episodes conclude with Saya fighting a Bairn. These scenes are, from the series’ start to its end, the major highlights. The fights are (with one exception), universally well-choreographed and animated, the earlier ones especially might remind watchers of the video game Bloodborne and if the show had stuck to this formula throughout, it might not’ve ever become great exactly, but it probably would’ve at least remained fun.

Blood-C’s idea of raising the stakes is where the real problems start to arise. About halfway through the series, the first named character (Nene, one of Saya’s classmates along with her twin Nono) bites the bullet by having her head quite messily chomped off by a Bairn. This starts an escalation of sorts, where the series seems to confuse intensity with bodycount. What starts as initially shocking and frightening quickly becomes merely gross, then dull, then outright boring. By the time a squadron of dividing bunny demons show up in the series’ final episode, you’re more likely to sigh than be revolted when one of them grabs a gaggle of townspeople, puts them in a giant sack, and blends them with an eggbeater. It’s nauseating sure, but given enough exposure the human brain will get sick of just about anything, and that’s as true of the countless gory (and in one of the series’ more unpleasant fixations, vory) deaths here as anything else.

If the problem was merely that the series didn’t know when the chain of messy gruesomeness became too much, it might be a glaring flaw in an otherwise good show. Unfortunately, it marries that problem to an equally large one, which is that aside from Saya herself, who is a cool protagonist if not an especially layered or thoughtfully-written one, it is difficult to impossible to care about pretty much any of the other characters. So, while it’s shocking when Nene gets her head chomped off, it’s not uspetting because it’s Nene specifically, it’s just a swerve. Similarly, in a later episode when a giant frog-crab-spider Bairn murders the vast majority of Saya’s other classmates, it’s really quite hard to care. It becomes obvious before too long that this is a show that equates bodycount with meaningful narrative development, which is a mistake that can pretty much cripple any attempt at serious storytelling. 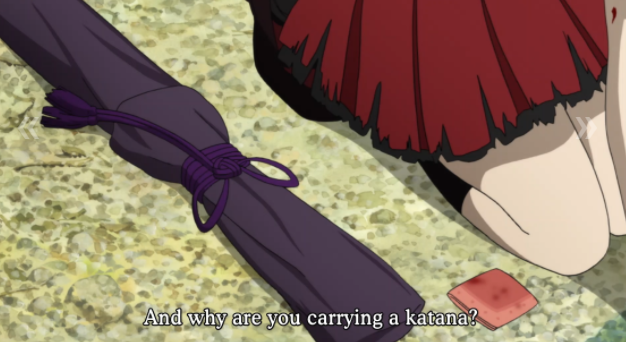 And goodness, does it make a genuine attempt at squeezing something resembling an interesting twist into its final two episodes. So it turns out that the entire town that Saya lives in--including her own father--are a manufactured “game” controlled by a vaguely-motivated villain to test her, Or Something, explanations are offered but they’re hazy, and even if they weren’t, this twist (which I am sure is intended to be super shocking) comes in as mentioned, at the tenth episode out of twelve. Even if this was an attempt to take the series in some other direction, it is by that point too late for it to matter much. Sadly though, it’s not even that, as the whole “it was all an experiment!” shtick mostly serves as an excuse to cheat all the named characters that had previously died on-screen back to life with very little attempt at justifying said happening, and then to kill all of them again. Exactly three named characters make it out of this series alive; Saya herself, the man who runs the cafe` she eats at every day before school (who turns out to be the mastermind behind it all. Of course), and one of her classmates who turns out to be a woman in her 30s playing at being a high schooler, and has possibly the least personality out of anyone in the core cast.

To be sure there is detail that could be gone into other than what I’ve covered here but, there’s really no point. Blood-C is a thoughtlessly-written series that tries desperately to impress you with its bodycount and willingness to show blood, guts, brain matter, and in one deeply unpleasant instance, maggots, splattered all over the settings and the protagonist. Unfortunately; it’s a pointless enough exercise that the main thoughts I came away from the show with were that Saya deserves a better anime to cut up demons in, and that at least the fight sequences were pretty good. It’s ultimately a pretty iffy way to burn six hours, I cannot in good conscience recommend it to much of anyone, unless they’re a truly diehard fan of the larger Blood metaseries of which this is a part. Even then, sister series Blood+ seems to be more well-regarded. At the end of it all, the prevailing feeling one gets with Blood-C is that nothing that happened in it actually mattered at all, which is really not what you want to leave your audience walking away thinking. 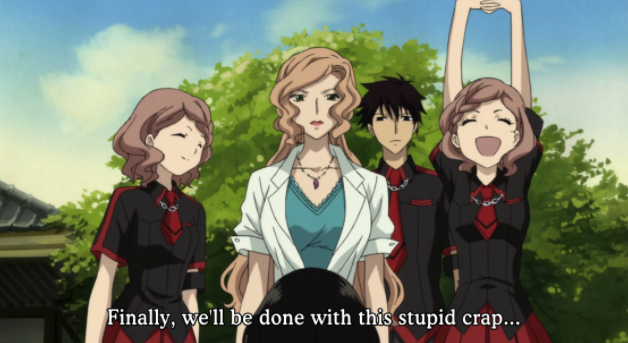