This review contains unmarked spoilers. They are extremely predictable outcomes that could be “self-spoiled” with a bit of common sense (K-On! isn’t plot-heavy, after all) but be warned nonetheless.

Can a story about nothing wrap itself around a looming end? In K-On!’s case the answer is inconclusive, because despite the approaching finale it continues to fool around as if the sunny high-school days will go on forever. While this season generally improves its utilization of simplicity to give the audience a fun time, it ultimately stretches itself thin, making its build-up to an emotional ending come up short if you couldn’t remain attached to the characters or your own nostalgia.

After the massive commercial success of season 1, it’s no big surprise that this 2nd season would have its episode count doubled from 13 to 26 episodes. That episode count, however, is a double-edged sword. It’s what this season thrives by and suffers from, because while it allows ample time for K-On!’s usual simple fun, it clashes with its inevitable conclusion if you don’t remain completely engrossed. All things considered, 13 episodes would have remained a better fit.

Giving K-On! extra run-time lets it do more of what it always did best: goof off. In this regard, K-On! seeks to hammer down its simplicity. Rather than relying primarily on character tics to deliver jokes, the girls mainly just play off of situations they find themselves in, and the majority of the girls’ antics take place outside of their actual club, often involving other school activities or just a closer look at the girls’ lives in general. This approach creates a numbing duality; while it’s about as down-to-earth as you can get and creates an impressive sense of realism, it also boils much of the show down to the point where it’s pointlessly dull – lessening the charm a fun time with friends naturally contains as it becomes just the girls doing ordinary things and nothing else. 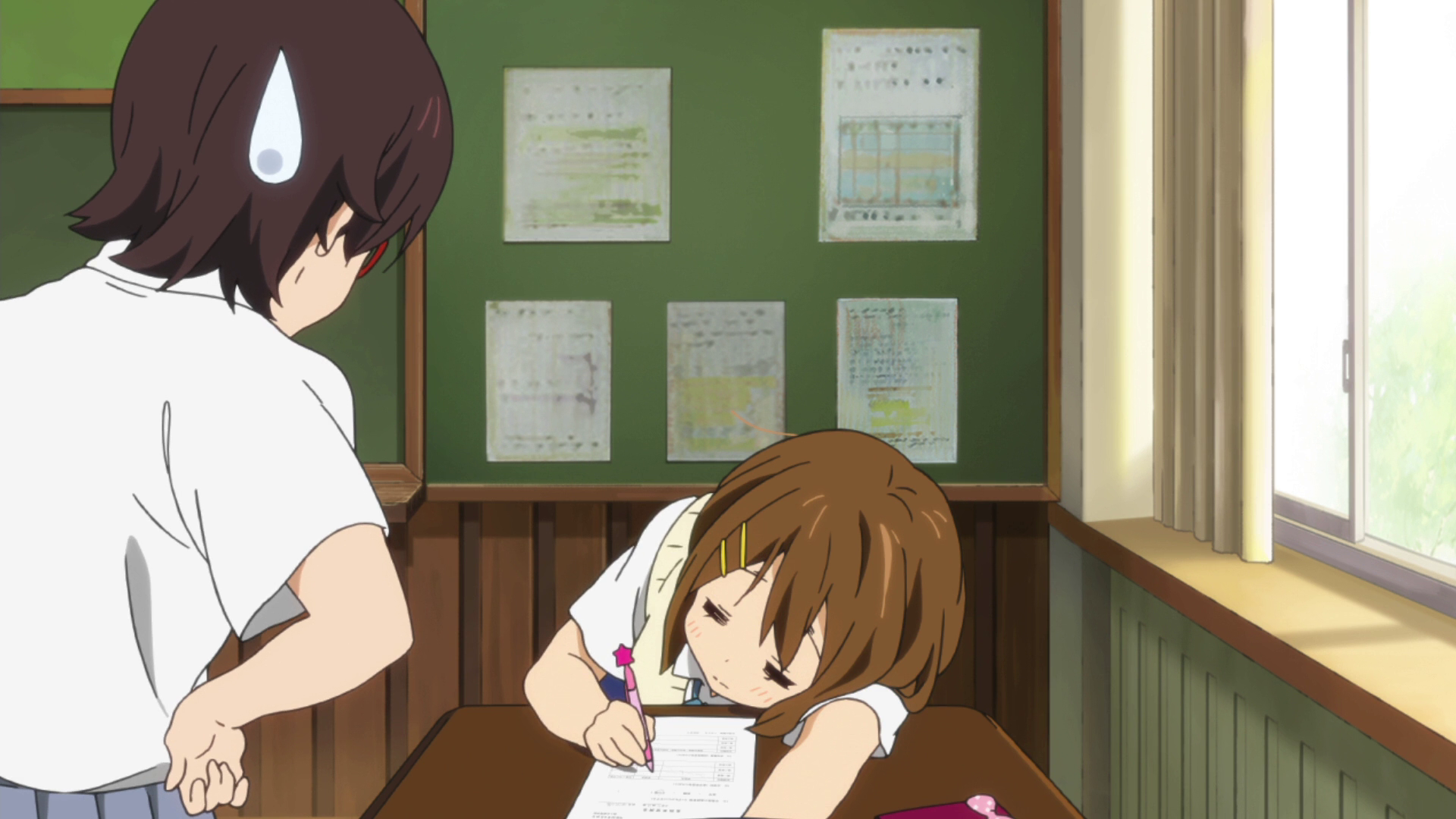 K-On! eventually has trouble finding fun things to do.

The result is a nigh-surreal experience where the anime gets so relatable that it feels like you’re right there with the Keion-bu. In this anime’s better moments this quality makes it shine, but sometimes the approach goes one step further and also reflects the mundanity of life with all of its delays and idleness. Some will and have found this dreamlike experience amazing, but without a substantial attachment or nostalgia for the anime, the events it portrays, or the characters, the stew of ordinary events is eventually overcooked into a homogeneous slurry of ennui. While not entirely unpalatable, it takes a special enrapture with the dish in its proper state to have built a true desire to consume it like this.

As a comparison, consider that there’s an episode that delves into Sawa-chan-sensei’s backstory by having parts of it she’s fought to keep hidden leech their way back into her life, and an episode that delves into Yui’s backstory by being one big metaphor to Yui being mentally slow (with multiple analogies to turtles to make it extra clear). The loose events that tie together to form each episode still need some hook to pull in those not entranced by the lure. While episodes like Yui’s backstory are silly enough to chuckle at a few times, most of it is as remarkable as a rainy Tuesday evening spent alone. Episodes that provide something more than a simple timewaster or easily foreseeable “developments” are spaced out further and further as the season trudges on. The hook almost completely disappears, and eventually it’s the lure that is ultimately used to try and catch you on its own.

I’ve already sprinkled little hints about how the characters are handled this season. With the narrative focus being placed on the simplest of events, all of the little quirks of the girls are brought to the forefront. It likely couldn’t have simplified itself so much without the girls being as nuanced as they had become. This is what allows for the sense of genuineness that realism requires, as there’s enough of these quirks between the characters to create situations that land a step above the expectation for believability in anime. It’s what leads to a “Yui’s Backstory” or a “Sawa’s Backstory” depending on how’s it’s used, but it’s an appreciable quality nonetheless.

The trade-off is that this approach does little to continue the subtle development they received prior, and unfortunately the writers chose not to do this on their own either. Few noteworthy developments are to be found in the expectable reactions to events that comprise much of the season. What little there is to build the girls up amounts to mostly obvious backstories. Yes, K-On! already had a good cast coming into this season, but when last-moment bullet-point traits start getting tacked on (like Mugi suddenly using a bunch of random Engrish or spurts of national pride coming out of Ritsu) just so that there would be something for this anime to do at those points, it becomes clear that those characters could have been utilized much more effectively than they were. Part of what kept Season 1 fresh was the humor bouncing off of subtly changing traits, after all. 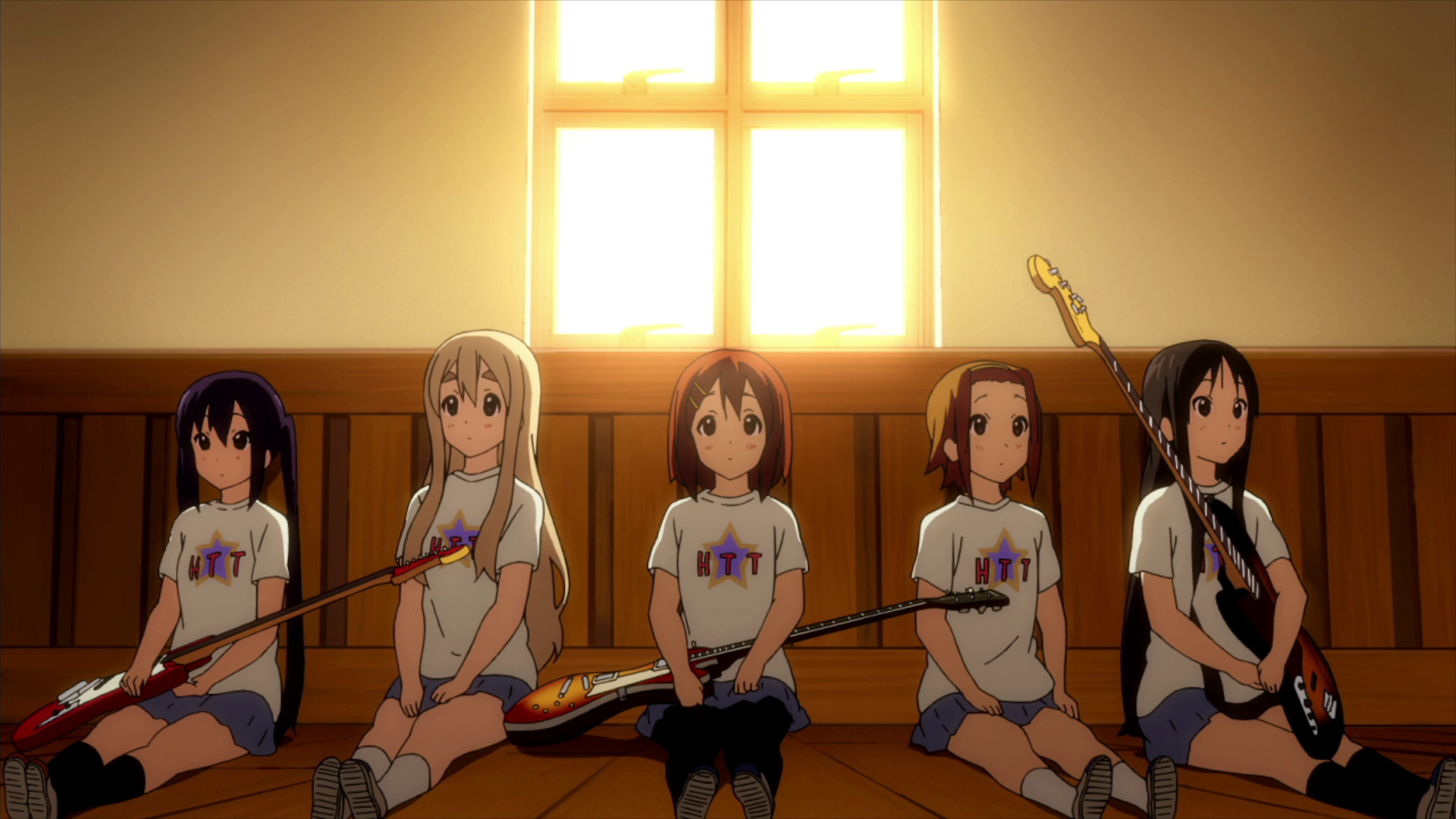 Everyone saw it coming, and yet it seemed like it would never truly arrive. Whether that refers to the inevitability of high-school graduation or the ending of K-On!! is up to your personal experiences.

Now, the faults I’ve outlined are not always bad things in the slice-of-life genre; hardly any of it is a real deal-breaker for someone just looking for some more CGDCT, and at its best K-On!! is better than just “some more CGDCT”. However, there is one major fault that this all funnels into, something that makes this overdrawn season all the more tedious should the tedium get the better of you: the way this anime concludes. High-school graduation is going to split up our beloved band, and the anime pours nearly all of its drama into this fact. But K-On!! wants to have its cake and eat it too, choosing to have multiple dramatic climaxes over the same issue while goofing off with the usual CGDCT antics for multiple episodes in between and afterwards.

I’m willing to accept that my perspective is one largely founded on personal experiences. Surely there are plenty of people who were (or will be) blindsided by the end of their high-school days. Maybe I just come to terms with things easily. Still, I know I’m not the only one who was burnt out before the last assembly began. The strong emotions many have experienced throughout their graduations and that of the Keion-bu’s require strong attachments. The biggest flaw in this anime is its major reliance on establishing a strong attachment, one that remains strong when dragged out over a period of time that far exceeds necessity and across the same finish line multiple times. Either you fall in love with K-On! before it stagnates and find a hearty farewell welling within you, or you don’t and you’re just glad that you can exit the ride. I’m genuinely happy for you if you’re the former, and I sincerely hope you can at least see where us in the latter might be coming from.

At least the production values are more difficult to argue over ~ KyoAni rarely disappoints in that regard. The visuals have been enhanced over the last season as a whole. There’s less moeblob moments and more fluidity & stylization goes into those that retain the aesthetic, allowing those scenes to flow better with the rest of the anime. There is also an increase in quality framing, coloring, and animation in general. While the animation in the middle of the season is lacking compared to the early and later portions, it’s still a step above anything the plot of K-On! ever demanded.

K-On!’s audio & visuals improved all-around and are expertly used to make this season’s strengths even stronger.

Personally, I can find no fault in K-On!’s audio. The masterful use of sound effects and voicework from season 1 came back just as strong and yet again added so much to the presentation. I question if this anime could manage to achieve the realism it does with even slightly less impressive voicework, and K-On!’s realism is the best compliment I can give to it outside of praising the audio directly. Compared to the last season, the music managed to be more varied and better composed despite mostly needing to represent the work of a high-school light music club. Some of the insert songs are more engaging & thoughtful than entire episodes, and the moments spent making those songs are some of the series’ strongest. I know U&I made me wonder what this anime would be like if music really was one of its key elements. Regardless, it’s all quite impressive for a show about girls drinking tea and eating cake.

Pre-established fans of the first season are likely to enjoy K-On!’s lengthy continuation and the way it distills itself closer to its base elements. However, less enthusiastic viewers just looking for another cute slice-of-life could easily find that some of the elements that fans find worthy of praise make the experience tiresome before long. The season was clearly made with heart by people possessing considerable skill, but whether it amounts to a worthwhile amount of fun depends too strongly on personal experiences and attachments for me to recommend it to anyone on the fence about continuing past season 1 who isn’t already a CGDCT enthusiast.